Checking in with No Signal 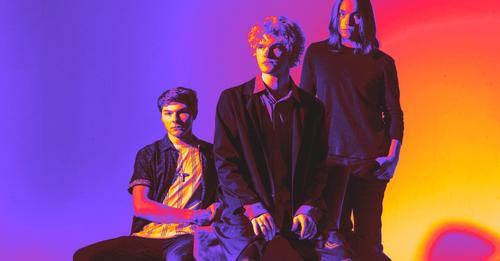 1. What was it that got you into making music? How Old were you?

“I was 14 when I started getting serious ideas and intentions with music. No Signal spawned in just a couple days of conceptualizing. As cliche as it sounds it felt like a ‘calling’, I kind of feel like a messenger, if things go good it’ll all start to come together and make sense to everybody. As for history I grew up in a notably artistic house. There’s lots of art and pieces in my house to start with, I think that must’ve taught my subconscious about the expression and personality of art. My dad is a musician as well, so we’d hear him playing instruments and music a lot. I recall being specifically attentive to Ozzy Osbourne, my father played those songs very well on the guitar and that got me into Randy Rhoads and rock music far before I played anything seriously. I would still play instruments when I was very young and throughout my life but I wouldn’t say I was doing anything too serious haha.”

2. Who are some of your influences?

“A lot of people don’t like my answer to this question all too much, but I’ll still be honest about it. I actively try to not have any influences. Something I’ve realized after trying to sound like all of my favorite groups at one point or another (before No Signal) is that one of the reasons I love them so much is because they have a unique sound. So at this point it’s nature that I don’t create music to sound a certain way, it sounds how it sounds when it enters my head and I just record it from there. So in that sense I have none, but I of course still have favorite artists and such.

I’ve very recently developed an infatuation with classical music, a lot of Rachmaninoff right now actually. His musical personality is so unique to me. It’s a sound I’ve felt in my soul since I was very young, so when I discovered him it was beautiful.

3. Let’s dig into “Embers.” Is the song about the Colorado wildfires? Or am I reading into it a bit too literally?

“To me, no. I’m using wildfires as a metaphor. I just so happen to relate to wildfires and how they feel, look, taste, smell and such given how many have happened near us. We as a band actually walked out of our most recent photoshoot and saw massive smoke clouds from a conflagration that happened in Superior; it’s just become commonplace. I actually took the image that is the cover of a huge fire that took place just a couple minutes from my house. It’s quite cool actually because what I photographed wasn’t even the vertex of the fire; you can see over to the left there’s far more light and smoke. That’s where the active burning was. It was huge.”

4. “Embers” is the 2nd single dropped (after “Jane” in September). Why is the LP release so far away, if you’re already dropping singles?

“Well to make the whole record a bit easier to consume and for the conceptual relevance of releasing it in ‘chapters’ we’re putting out some singles from the first half of the record, we’ve been doing that for a while now. However, there’s simply more that this record needs for it to be what it needs to be before it’s released in its entirety. I’m putting no rush or intention to make it happen right now on it, that would definitely compromise the project. It’s going to be our biggest project by far, and I’ve been planning on album two to be that way since No Signal started, its good that its turning out that way on its own”.

5. You’re only nineteen-year-old. But you’re getting ready to drop your 5th release. How has your music evolved since you released Circle in the Sky back in 2018?

“Fifth already huh. I’d honestly just say the music is getting better. It’s always been conceptual and such, the stories and ideas have always been there; though I think the songs themselves are improving. As we get larger I gain access to more resources that allow me to execute everything closer to the way I intend for it to be seen. So everything backing up the music has improved as well”.

6. If you could meet, play a gig, co-write a song, have dinner, have a drink with any band or artist (dead or alive) who would it be and why?

Jake and I are super into this group called ‘Magdalena Bay’ right now. I’d love not only to create a song with them but also to sit down and dissect their brains and understand more about who and what creates such a cool sound and idea, let alone how well they’re executing it. It’s pop though it feels just as complex and captivating as say prog music.

We hope so, those small local shows are a bit harder for us given our geographic situation as a band. So we’re hoping some big breakthrough or supporting act situation gets put together so we can start playing more shows. We’re still doing an occasional headliner here or in the nearest town.

8. It’s shout-out time. What Colorado bands should be on our radar?

My favorite local band right now is a group called ‘In Plain Air’. Songwriting and musicianship is fantastic, its a huge breath of fresh air. They’re just doing what they want to do, and they’re doing it really well.