Posted on: May 16, 2013 Posted by: James McQuiston Comments: 0
Usually, I would stay away from live recordings from smaller labels like TKO just for the fact that many of these bands really don’t have the equipment necessarily to make their live performance not sound like shit. Take for example the Leftover Crack live show from Reading, PA in which it is virtually impossible for an individual listening to the disc to actually figure out which lyrics are being sung, much less which tracks are being played. However, Strychnine is able to counter these traditional flaws and put out a killer live disc that showcases the last show the band would ever play. While the disc suffers in many of the audience/Jimi conversations (as the mics are suited for loud, brash singing instead of rumbling crowd noise), the performance of each track is something that any band should strive for, regardless of whether it is being recorded or not.

So, onto the actual band themselves. I have to be honest, I hadn’t even heard of Strychnine before I got this CD, but I can honestly say that I like this band. Strychnine may be from California, but that isn’t anything to hold against them – they play punk in a drunk vein, something like Dead Kennedys, D.R.I., and Pink Turds i n Space. Loud, brash, and reading to do a breakdown in a seconds’ notice, this band is able to get the audience involved in a way that not many acts are able to this way. In tracks like “P.C.A.T.I.P.O.M.”, Strychnine can do a multi-part harmony that isn’t as embarrassing as Taking Back Sunday and All-American Rejects, and even of a harder bent than even Bad Religion. Strychnine does not just play that over-distorted type of power chord song each and every time up at the mic – while some of the breakneck-tempoed songs might be that way, the lead up to tracks like “Of Dignity” shows the technical agility of the band.

Each member has their moment in the sun, whether it be the chugging-along bass lines of Joe Fucko or the guitar slides and trills of Hoody and Idon. Simply put, Strychnine was the carrier of the banner of this harded-edged punk rock that is curiously absent from many definitions of what punk should be now-a-days. Where bands like Fear can milk out the same tired tracks about beer, Strychnine had to actually put out decently-written, excellently-played tracks – and yet again, we notice a hell of a lot more Fear CDs in the major stores than Strychnine – why is that? The simple fact is that a great number of people are not wanting to hear anything original, but the same formula rehashed. Strychnine is original and talented, and try to go everywhere with their music, instead of pulling an Unwritten Law and doing the same album for the last 10 years. If you are adventurous, or simply like good music, pick this up. 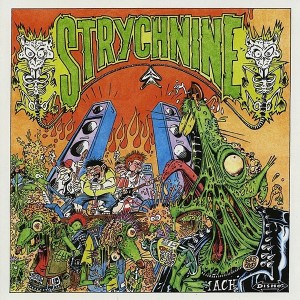