HELLO, HICKS. HOW ARE THINGS GOING OVER IN STOCKHOLM?
Everything’s great here in Stockholm. Just got back from a well needed vacation in Greece with the family. So now the batteries are charged to the max and I’m ready to go back to work. 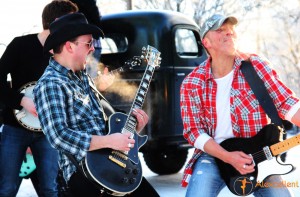 WHAT IS DIFFERENT BETWEEN THE COUNTRY SCENE IN SWEDEN AND IN THE UNITED
STATES?
The country scene in Sweden isn’t big at all: We have a lot of country music fans but media doesn’t cover country music that much. But it’s slowly starting to get better. TV shows like Nashville and Heart Of Dixie have opened peoples ears and eyes that country music is actually really cool. I’m doing what I can to get country music on the map over here. And it’s starting to pay off.
When you say that you’re country artist in the US nobody thinks that funny or strange. While here people rise and eyebrow and are like “Country music??? Isn’t that just a lot of whining about a broken heart”

Country music has changed so much over the last few years and many people over here are still thinking that country sounds like it did back in the day. I love the old school country but I’m just as a big fan to the new era
in country music. There aren’t that many places to play when you say you’re playing country music. So I haven’t played that much in Sweden maybe around 15 shows. I’ve played a lot more abroad.

HOW HAS YOUR STYLE EVOLVED AND CHANGED OVER THE PERIOD SINCE YOU FIRST
STARTED?
It hasn’t changed that much. I still keep one foot in country and the other one in rock and I mix it up. I’m not trying to reinvent the wheel. But I’m trying to create my own sound so when you hear one of my songs you immediately know that it is a Hicks songs. I want to stay true to myself in what I like and how I want to come across to the fans.
Maybe I have changed a little on the lyrical side. Trying to find a little more depth to the lyrics. I like when lyrics can have different meanings to different people. And that a lyrics may seem to deal with one topic but when you look at it closer it’s about completely something else. When there’s a deeper meaning in what seems to be a superficial lyric. I just love that…

WHO ARE YOUR BIGGEST INFLUENCES MUSICALLY?
First and foremost GREAT songs. I don’t care so much what style they are as long as they are GREAT. But Brooks And Dunn is very close to my heart. I love the way they mix country, rock, blues and soul together. I’ve got all their albums. BIG FAN.
Garth Brooks is another one that I think is amazing. When I first heard him back in the 90 I was just like WOW… This is it… Music doesn’t get any better that this. I have to mention Eric Church I love his rebel attitude. Going his own way and doing it the way he wants to not the way somebody tells him to. Big And Rich same thing here rebels, outsiders that make county sound new and fresh. What all these have in common is they know the country roots. Where it comes from and why it sounds the way it does. And then they go and do their own thing with it. And I  guess that is why I love ’em so much. I can relate to that. Going against the grain. Doing your own thing no matter what.

HOW DID HAYRIDE COME INTO YOUR HEAD?
I wanted to write a fun up tempo beer drinkin’ foot tappin’ summer song. So I started to think about fun things to do and a Hayride could be very funny. especially with the right person. So the chorus came almost immediately. And I had it in my head for a while not quite sure what do whit it. So I took it to Lasse Andersson and played it to him
and we finished up that song in ten minutes. And we were laughing all the the time. I think you can hear how much fun we had writing it when you listen to Hayride. Spider Joe and his cousin Moe were childhood friends of mine. And we did a lot of crazy stuff growing up. So I wanted to put them in the song. Spider Joe died some years ago. This is a way for me to keep his memory.

YOU HAVE WON OR HAVE BEEN NOMINATED FOR A NUMBER OF AWARDS. WHAT HAS
BEEN YOUR BIGGEST HONOR WITH THESE AWARDS?
All have been great honors. There are so many talented country artist out there. And just to be nominated is in it self such a huge huge honor. And then to go and winn. What can I say… it’s just mindblowing.

YOU HAVE DONE A NUMBER OF VIDEOS FOR YOUR MUSIC. WHAT DO YOU THINK THAT
VIDEOS DO FOR A SONG?
There’s two sides of the coin… A video can either help a song or totally ruin it. Take the song Gangnam Style without that video it would never had become such a huge hit all over the world. When I do a video I try to capture the song. Keeping it simple. If it’s a fun song like Hayride it has to be fun to watch it as well. And that’s why I choose to shot it in -3 degrees (F) Now that’s cold. But we had so much fun doing that video and I think it comes across when you
watch it, And I also wanted to do something different. It’s kinda obvious what kind of video you should do with a title like Hayride and sing about summertime. So I did the opposite and shot it in the winter. Just for the hell of it.

The video for Unreachable Dream there I went a little more serious. Since it is a more serious song. It’s about never giving up on your dreams how dark and hopeless it might seem. And the verse deals with that and I shot that in black and white while the chorus is filled with hope and there we go into color. Mamas Kitchen is my first video. And I wanted it look really homemade. I invited a couple of buddies with their families and we threw a BBQ party and we filmed it. We didn’t have the technology to film it with our phones and edit that. So we used as cheap cameras as possible. Just so we should get that homemade feeling. Lasse Niemala the director and editor of my videos is really cool guy to work with. I throw out a lot of ideas on how I want it to look and then he throw out his ideas and
then we take the best ideas and make a video. Simple… and fun.

I’m in the studio working on my album doing the last tweaks. I’m going back to London to play at this years British CMA. That’s a huge honor. Going back to Nashville for some co-writes. Doing a lot of radio promotion for my newest single Hayride on country radio all over the world. And it’s starting to climb the country charts around the globe. Been asked to write a few songs for other artists and that’s gonna be really cool. Can’t tell you who they are right now. But when it’s official I will sure let you know My manager Michael Stover at MTS Management is keeping me busy.

DO YOU HAVE ANYTHING ELSE TO SAY TO US AT NEUFUTUR?
I just wanna tell everybody never give up on your dreams. No matter what someone else is saying. Don’t wait for permission from someone you think you need permission from to start living your own life. Don’t listen to
the naysayer and haters. Listen to your own heart. What if I listened to all the “experts” that told me…

Win “Favorite Country Group” at IMN Country Music Awards
Been nominated for “Best International Artist” and “Video Of The Year”
at ICoMA Country Music Awards
My songs played on thousands of radio stations all around the world
Done radio and TV interviews in Italy, France, England, Ireland,
Australia, USA, Sweden, Norway, Canada, Germany…
Been nominated for “Song Of The Year” and “Video Of the Year” at
Nashville Universe
Play at country festivals in the USA, France, Sweden…
Been nominated for Song Of The Year, Video Of The Year and Songwriter
Of The Year at IMEA AWARDS
Got fans from all corners of the world
AND… THE BIGGEST THING OF ALL…. WINNING “BEST EUROPEAN COUNTRY
ACT OF THE YEAR” AT THE BRITISH CMA IN LONDON.
I don’t mean to brag, or sound arrogant, it’s just that I’m so darn proud and happy that things are going so well.
Good thing I didn’t listen to anybody else but myself!

THANK YOU SO MUCH FOR ALL OF YOUR TIME.
Thank you… this was just a big pleasure.