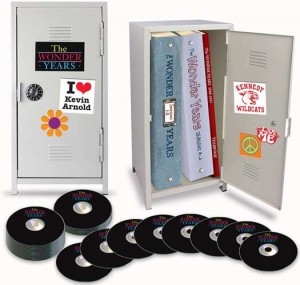 Shockingly, this landmark TV series, has never been released on DVD before now. The series, which ran for six season, helped influence an entire generation of TV shows – many employing The Wonder Years hallmark of the main character, offering voice over narrations (Daniel Stern, in this case). The list of shows that adopted that Wonder Years voice over is pretty expansive: Everybody Hates Chris, The Goldbergs, Veronica Mars, Arrested Development, My So Called Life, Scrubs, The Mindy Project and on and on…

For those born last year or anyone who didn’t own a TV or read a magazine in the ‘80s and ‘90s, the show centered on a pre-teen Kevin Arnold (played by Fred Savage) and his family (an annoying older brother, an distant older sister and tough, but caring parents) living in a non-descript suburb somewhere in the U.S. during the late-1960s. Despite the setting, which was an obvious appeal to Baby Boomers, the show’s writing and easily relatable plots managed to pull in viewers from several generations.

The stories were sweet without being too saccharine and the story plots, covering everything from the Vietnam War and Civil Rights to hippies and first kisses, though well tread at this point, were covered in such an endearing and often creative story-telling manner, that most didn’t mind. The series also managed to stay strong through all six seasons, a pretty incredible feat nowadays.

This 26-DVD set is crammed with all 115 episodes and almost a full days-worth (23 hours) of extras and bonus featurettes, including a cast reunion. The set comes in a specially-designed metal locker (naturally). A fitting tribute to an influential and well-loved show.