Stuck On You is a track that has a current and contemporary sound while looking back into the archives of seventies and eighties female country singers and nineties alternative-pop performers. There is a certain richness that is cultivated through this initial effort that will keep the track bouncing around listeners’ heads long after the track has ceased. Bad Girl works at the juncture of rock and honky-tonk; the confident guitar work that is present during this cut elicits memories of smoky bars and dimly-lit meeting halls. Reed’s vocals tie together Shania Twain with Carrie Underwood, establishing a melody that provides an additional level of complexity to True North. 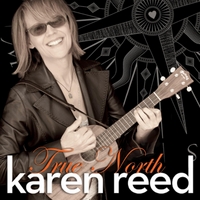 No Shame slows down the tempo of True North considerable, a switch to the status quo that allows Reed to showcase a complex and fulfilling interplay between the guitars, drums, and vocals. The track is alluring and earnestly sang, something that imparts a much more approachable sound to Reed’s harmonies. The track continues to progress from beginning to end, with the final result of the song existing with a much different sound than it possessed at its onset.

True North concludes with Starry, Starry Night, a tremendously emotive track that tells more with a single ukulele than a full band and loquacious lead singer ever could. The minor twists and changes that the guitar goes through on this effort will keep listeners focused in until the track concludes at the four minute mark.

Make it a point to visit her website for samples of the tracks from True North, live dates, and further updates about this impressive artist; Reed is the rare example of a performer that places each distinct facet of her personality onto an album.