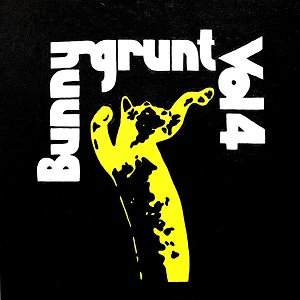 While the band and label are still opting to describe Bunnygrunt as “Cuddlecore,” I think Power Pop does just fine here as a descriptor. The latest from the St. Louis band, Vol. 4, their sixth album, is brimming with infectiously addictive songs that span anywhere from one-to- seven minutes, but the band really excels when focusing on three-minute sing-alongs like “The Book That I Wrote” and “Frankie is a Killer,” jangly guitars, pounding drums and male/female vocals trade-offs. The CD and cassette version of the album (cassette, sigh) also includes eight bonus tracks. Hidden among those add-ons is the fantastic (and hopefully) autobiographical, ridiculously charming rocker “Don’t Forget Who Your Friends Are.” That one song alone would be worth the price of the record, but lucky for you there are plenty of others great songs here competing for your attention.