Fedd Up is a band from my old stomping grounds (Lancaster, Ohio), and they have just released their Dark Days EP. Fedd Up is opening up for Ghosts in the Attic on September 25th at Victory’s Live. Jake Smith lays down the vocals, Dirk Crist hits the skins, Eric Merz plays bass and Nick Alvis straps up on rhythm guitar. The band is able to create something special with a blend of seventies rock, sludgy alternative metal in the vein of Kyuss and Alice in Chains, and tribal-infused acts like Taproot and Soundgarden. 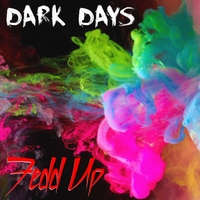 I feel that the greatest contribution that Fedd Up makes to hard rock is the unified front that the constituent elements of the band create. The production does a lot to ensure that the guitars, drums, and vocals have ample time to shine, but the talent of each member of the band makes for tracks like Wrecking Machine and Into the Fire that continually shift and change while keeping listeners firmly on the edges of their seats.

Where rock usually takes on a guitar/drum dynamic and runs with it, the chugging bass line that is laced through efforts like Ewok further fleshes out the persona that is Fedd Up. The density of each of the band’s compositions mean that fans will be able to hear something new each time they play through Fedd Up’s music. While the city of Lancaster is small compared to Columbus, Cleveland, or Cincinnati, the town has a variety of currents running through it. Whether it be hints of goth, country, or gritty Detroit-styled rock, Fedd Up is able to pick up these trends and weave them into compositions that are as taut as a drum.

The act has garnered play on local Columbus radio stations, including CD102.5 and 99.7 The Blitz. Individuals that wish to hear samples of the tracks from Fedd Up’s Dark Days EP can find cuts on the band’s ReverbNation. Here’s to hoping that Fedd Up will be able to enter the studio to record a follow-up to the Dark Days EP that further expands upon the dense array of influences and styles that were presented fans on this initial offering. The band is also active on Facebook, ArtistECard, and Youtube.