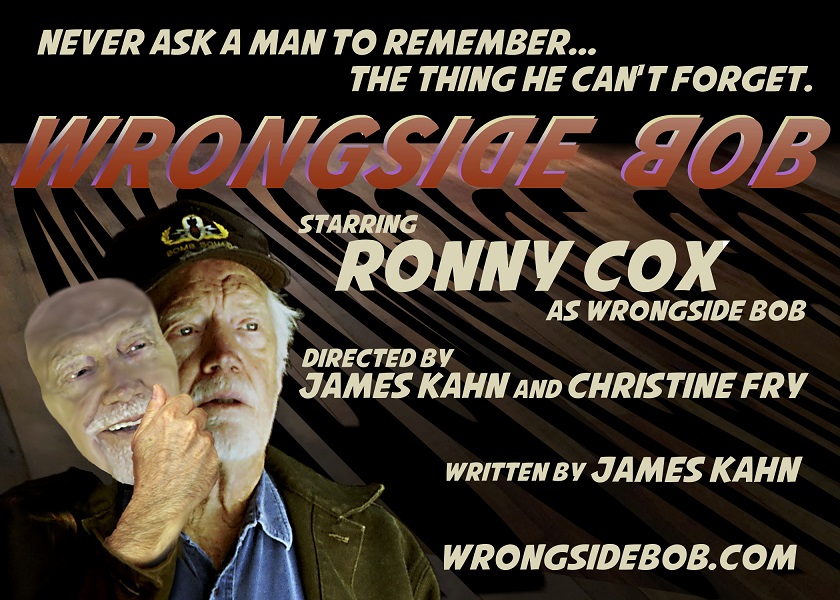 “We’re so lucky to have Ronny attached to this project,” said Producer Christine Fry. “He’s not only a great actor, he’s the perfect embodiment of Wrongside Bob, this quirky old bar fly with a dark secret.”

The film is currently running an Indiegogo campaign to defray the costs from the film.

The comedy/drama film concerns a drifter with amnesia struggling to remember his past, who runs into Bob – a man desperate to forget his own past. With help from some of the oddball regulars in the roadhouse, both men achieve a measure of peace at the end, though not without trouble along the way, and a bittersweet resolution.

The movie is enriched by Americana music, some sung by Wrongside Bob – often evoking the trials of the bikers, dancers, loners and pretenders who populate the bar. Wrongside Bob is a genre crossing of Noir and Country,

“This is a film about the masks we all wear,” says writer-director Kahn, who also wrote and produced Melrose Place and Star Trek: Voyager. “The way we hide our deepest shadows from the world – and often from ourselves, as well.”

Finally, the Production is also excited to announce it will donate 1% of its initial financing to e-Nable (http://enablingthefuture.org/), a nonprofit 501(c)(3) whose mission is to make and give away prosthetic hands to children who need them.

Kahn – who is also a medical doctor – feels strongly about the importance of giving back, after being so fortunate in his own life. And he knows well the value of restoring a young person’s hand. After all, in writing the Return of the Jedi novelization, he was inspired by Luke Skywalker, who – despite having his hand amputated by Darth Vader – went on to get a prosthetic hand and save the galaxy.

Wrongside Bob is expected to begin principal photography early in 2016, and anticipates release at the end of that year. Mark it on your calendar.