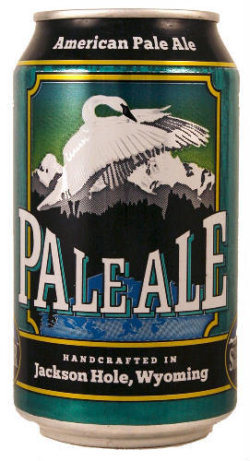 Snake River Brewing (Jackson, Wyoming) has created an eponymous Pale Ale which pours with a yellowish-orange coloration and a ton of beige head. Floral and hoppy sides are present in the initial nose on the beer, while the first sip that an individual takes will showcase perfume and rose elements. There is a good amount of grass and wheat notes that make their presence known at the beginning of a Snake River Pale Ale, creating something that is refreshing and is very consistent. It is this constancy that makes this effort into a great sipping beer, perfectly paired with raisins, pineapple, and wine-infused cheeses. The beer would also shine beautifully if paired with Asian, Indian, or other strongly-flavored cuisines; this utility hitter has an easy-going demeanor that allows a wide variety of plates to shine.

Snake River has created something that will bring imbibers back to the bright greenery of the early spring with this Pale Ale. There is a small amount of bitterness that is provided by the inclusion of Cascade hops, but the different elements of the beer work well to create a balanced experience.  After Snake River has time to sit, the beer is able to settle into a flavor profile that eschews much of the in-your-face flower-power, utilizing more of the piney notes of the hops to make individuals finish the beer with as much aplomb as they initially began.