Ottawa’s Dead Air Republic creates a heavy, hard, and sludgy form of metal that will assault listeners from the beginning until the ending of their new release, With Extreme Prejudice Just Another Bullet is the first cut off of their latest, taking up the standards of Corrosion of Conformity, Arrested Sevenfold, and ratchets it up to ten. Taking turns in the spotlight, the constituent members of Dead Air Republic create something beefy, varied, and continually impressive. 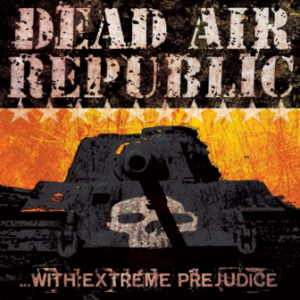 The Waves is the third track on With Extreme Prejudice, creating something that is darker and more contemplative. The deliberately slower approach means that every splashy drum, emotive bass line, and supersonic vocal utterance works towards creating something that will resound loudly in listeners’ heads long after the track has ceased. After Dead Air Republic speeds things up in the final half of The Waves, Good At Never is bolstered to the highest echelons by a sound that refreshes the venerated style of Judas Priest.

Buzzkill is the penultimate effort on With Extreme Prejudice, linking together a ropy bass line, virtuosic guitars, and a vibrant set of vocals into one of the hardest rocking songs on the release. Enough of this Mess changes the overall style of Dead Air Republic up; the initial dynamic that is created between the drums and bass leads into an uniquely-styled single that could easily make it onto rock radio stations. Vocal harmonies are infectious as all get out, providing listeners with a further narrative as well as giving further depth and complexity to a song that already has Dead Air Republic giving it their all. This is a tremendous EP, a release that will keep individuals amped up from beginning to end.

Top Tracks: Enough of this Mess, Just Another Bullet