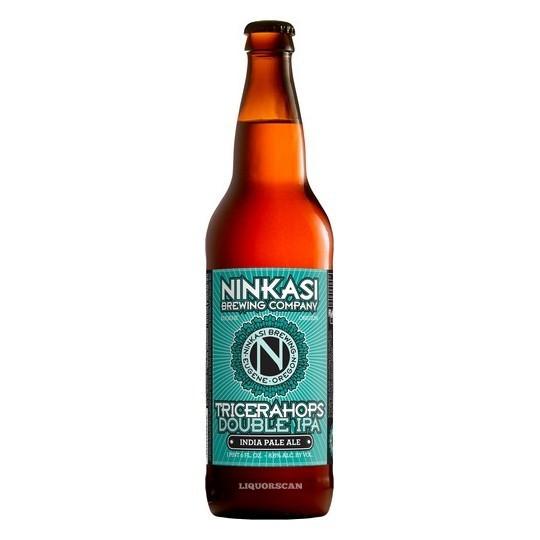 Ninkasi’s Tricerahops, a dry-hopped double IPA pours with an amber coloration and a bit of lacing. A bit of sweet note on the edge, much more of a West Coast IPA with bold flavors of pine and floral elements that immediately present themselves when one opens the 22-ounce bottle.

Ninkasi contributes to the double / imperial IPA style through the inclusion of a wide-array of hops; the blend here includes Cascade, Centennial, Chinook, Palisade, and Chinook hops. Tricerahops continues to provide imbibers with different twists and turns the further they get into the beer. Rather than falling into a sugary mess, the beer leverages its heavy amount of hops to create something that is decidedly different halfway through the beer than it was at the beginning or the end of the bottle. The ABV (8.0%) of Tricerahops is a key contributor to the beer’s unique flavor profile, adding just a bit of alcohol burn that sets everything off nicely

There is a fair amount of wheat and toasted malt presence to Tricerahops (contributed by the presence of Carahell, Munich, and 2-Row pale malts) that cuts through the strong bitter elements here, establishing a beer that is approachable while keeping bold flavors at the fore. The bite of Tricerahops makes it a brew that is well-position to be paired with strongly-flavored cuisine. I found that this double IPA shone brightest when included alongside Indian or Thai food, but fans of creamy cheese will like how each side highlights the other.

Tricerahops is available year-round in the aforementioned 22 ounce size as well as 12 ounce bottles and on draft. Ninkasi’s main domain is a great repository for information about the brewery’s year-round and seasonal offerings, while their social media profiles discuss new products and events.