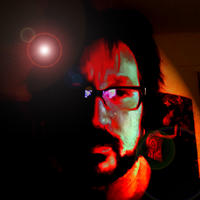 Today, we are speaking with Minnesotan performer Brian Edblad. Can you give us a little background information about yourself? How did you get into music?

I’m a lifelong Minnesotan, I grew up in Duluth and have been living in Minneapolis for the last 25 years. As a kid I split my time between playing music and playing hockey. I got the music bug at an early age. My whole family was musical and my father used to have jam sessions in our living room and me and my siblings would sit at the top of the stairs listening when we were supposed to be sleeping. Then when I was about seven or eight my brother and I sang Bob Dylan’s “Blowin’ in the Wind” at a small church up in West Duluth and I was hooked.

You have just released a new album, Flypaper For Freaks; what was the writing/creative and recording process for the album like?

I took a little different approach to recording flypaper, whereas I will lay rhythm tracks for several songs when recording with The Velvet Pancakes or The Undergroove, with this record I worked on one song at a time, often composing as I went. I wanted to experiment more with synthesizers and sequencers to try and create a mix of EDM with some old school sax or guitar (Being a sax player and guitarist this was kind of off the beaten path for me). I do all the recording in my home studio so whenever the creative juices flowed I could fire things up and lay down tracks (even at 3 in the morning).

What’s your favorite track off of Flypaper For Freaks (and why?)

I would have to say (at this time) my favorite tracks are “Flypaper for Freaks” and “The World’s Passed Us By”. …Freaks because I’m happy with the synth groove and sax part and “…world” because that song means a lot to me and John (my drummer in the Pancakes) had just bought an acoustic/drum called a “slaptop” and we recorded World in my living room with a single mic on his drum and I really liked the feel of that take.

Please give us a brief rundown of The Velvet Pancakes and The Undergroove. (Who are they, how are they different from your main music?)

I really enjoy playing with both bands. John May(VPs drummer), Jason Flinn (UG drummer) and myself played in a band called The Pain Shop together about twenty years ago so we have history together.  The Velvet Pancakes is my main band for my original music. I am the frontman, guitarist/sax player. Besides myself, there is John on drums, Liam McNally on bass and Tommy Stevens on the trumpet and we often have guests sit in on gigs (I have been blessed to have some great musicians sit in). We are kind of a rock and roll jam band with horns. My other band, The Undergroove, is a whole different ball of wax. It’s an old school funk band (AWB, James Brown, The Meters, etc.) and in this band I stick with the sax and have the pleasure of playing with some super talented musicians. They are Mike Mothershed on lead vocals, Andrew Fadness on lead guitar, Ryan Haas on vocals, guitar and harmonica, Jason Flinn on the drums, Lamont Sandifer on percussion, Tim Krueger on bass and finally myself on sax and Tommy Stevens on trumpet as The Velvet Horns. ;). So basically I have three musical things going on and they are all quite different from each other, although I am trying to work up some of my solo stuff with the VPs and translating the recording to a live show is still a work in progress.

How has being away from the typical musical hot spots of L.A. and New York City generally helped and hindered your career?

I moved from Duluth to the Twin Cities to pursue playing music and I never thought of moving to the coasts because my family is from Minnesota and I’ve lived here my whole life. That being said we’ll never know what may have happened had I left the midwest.

For my recording set up I use Pro Tools 8 with  Digi003 and an ADAT preamp and run it through an old MacBook pro. My go to mics are Sure SM57 and an Audio Technica 2020 large diaphragm condenser but I have recently upgraded to a Blue Bottle mic, which I love for sax but not sure of for vocals. Being that I am self taught on Pro Tools I am always learning new things and I’m sure there are things that I’m not doing correctly but I try not to get to concerned with things I don’t know about.

This is a great question James. There are so many great artists out there that have influenced me in one way or another but I will try to keep this short. There are the more obvious ones: Elvis, Johnny Cash, Tom Petty, Willie Nelson, Ray Charles to start with, then my favorite sax players…Sonny Rollins, Junior Walker, Charlie Parker to name a few. I love Dizzy Gillespie’s trumpet playing. I loved the Beach Boys as a kid and also used to listen to my dad’s old country albums. On a different note I a big fan of Gang of Four and I love Infected Mushroom, so there’s quite a diverse group of people. As for a dream lineup to perform with, there are so many greats..I wouldn’t even know where to begin. So I’ll leave it at this. Sitting in with the Travelling Wilburys would have left a smile on my face forever!

Right now I’ve had some good listeners on a site called NumberOneMusic.com (currently at about 175,000 listens and through this site have made connections with other musicians… did some sax work for a couple of bands on this site). I also do Facebook, Reverbnation and Soundcloud to name a few. To be honest I’m still trying to figure out this whole new “virtual” world and the unlimited possibilities it presents but call me old fashioned, It’s not the same as having a face to face conversation with another person. Old School!!

What does the rest of 2017 hold for you? Do you have any additional thoughts about life and the universe for our readers?

My plans for 2017 aren’t much different than 2016….keep playing, writing, and recording. And trying to be a decent human being!

A good place to hear my music would be at my site: www.brianedblad.com

Thanks for the interview James. In parting I would like to say thanks to music lovers everywhere and in today’s crazy 24/7 news cycle, facebook/twitter world it’s good to unplug once in a while to enjoy the world in all of it’s infinite beauty. Oh. and call your mother and tell her you love her!  😉