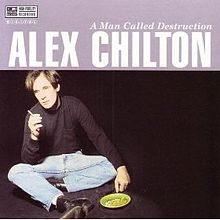 Throughout his solo career, Alex Chilton was in the unenvious position of having to compete with his work in Big Star. Despite only putting out a few albums, Big Star, even decades later, is one of the most influential power pop bands to ever come out of the U.S. and all three of their official studio albums are undeniable classics. So, anyone having to follow that track record was bound to disappoint some. Throughout the ‘80s and ‘90s, Chilton managed to put out several decent records and a handful of great ones; A Man Called Destruction falls into the latter category.

Omnivore Recordings, which has been on a roll of late re-releasing a slew of brilliant Big Star rarities, most recently some Chris Bell records, has just put out an updated version of A Man Called Destruction with seven bonus tracks. Originally out in 1995, the record included a dozen tracks, half of which were written or co-written by Chilton, the rest covers. And even covering a 1950’s Italian pop song, as he does on “Il Ribelle,” he completely owns the material. Similarly, his take on the late ‘70s novelty “What Your Sign Girl” manages to transcend eras and sounds as if it could have been written last week, despite the hokey Age of Aquarius themes, all thanks to Chilton’s cool casual delivery. The one exception here is the Jan And Dean “New Girl in School” which sounds perpetually dated.

The additional tracks here manage add more depth to the album, like an alternate take on “Devil Girl” with double-track vocals and a great organ-heavy cover of Clarence “Frogman” Henry’s “(I Don’t Know Why) But I Do.” Like the Big Star and Bell re-releases, this new take on A Man Called Destruction is well worth owning.