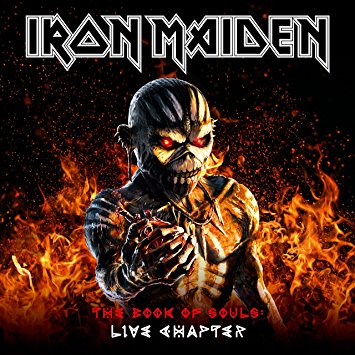 It’s a pretty ballsy move to put out a live album of the record you just released, but that’s what Iron Maiden has done with Book of Souls: Live Chapter. And they manage to pull the feat off impressively well.

While not an exact an exact playlist of 2015’s Book of Souls, half of the material off this two-disc, 15-song collection is taken from that record, admittedly one of their best in years. This set culls some of the best moments from their 2015/2016 international tour supporting the record, taking recordings from several continents and tossing in a handful of Maiden classics for good measure (“The Trooper,” “The Number of The Beast” and “Powerslave,” but sadly no “Run for the Hills”). The newer songs, like the first two of the set, “If Eternity Should Fail” and “Speed of Light,” pair perfectly with the classics. And Bruce Dickinson’s vocals are pristine here, despite the singer recovering from throat cancer around the time of the tour.

Iron Maiden are no strangers to the live album. To date, they’ve already released about a dozen over the past few decades, but Book of Souls: Live Chapter ranks up there as one of their best. It’s being issued on several different formats: as a limited edition deluxe 2 CD book, a regular 2 CD album, 3 vinyl LPs, and digital download.