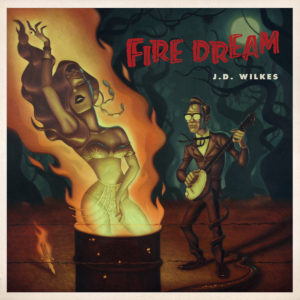 As frontman for The Legendary Shack Shakers, J.D. Wilkes has been one of the loudest and earliest voices in the Bluegrass/Americana revival going back two decades now. And while it finally seems the rest of the music world is catching up with him, he pivots slightly on his impressive and impressively experimental solo debut.

“Fire Dream” builds on the roots and rockabilly foundation set up by The Legendary Shack Shakers and goes further, creating a delightfully odd hillbilly, cabaret gypsy vibe. Across 10 tracks, Wilkes creates a Southern Gothic masterpiece complete with hobos, trash barrel fires and even an eerie carnival (captured beautifully in the album’s closing track “That’s What They Say.”) Playing banjo, harmonica and piano, Wilkes brings in friends like Drive-By Truckers bassist Matt Patton and Dr. Sick and Jimbo Mathus from Squirrel Nut Zippers, among others, to help set up this backwoods world divorced from the influences of modern music.

A native of Kentucky, there’s an authenticity to this music here and an obvious homage to those before him that tends to get lost when collectives from Brooklyn or Portland attempt to create similar music. From the stellar self-titled opening track with the gypsy violin and stoic call and response vocals to the very last song, Wilkes crafts a moody album that is hard to resist.