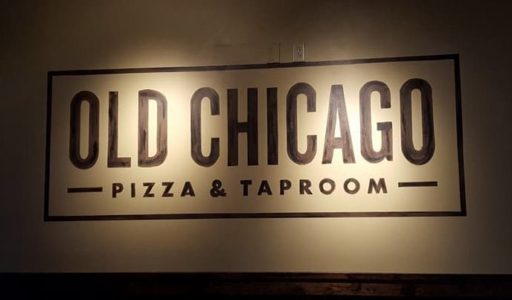 During each of our trips to Little Rock, it seems as if we always make it over to the same side of the city, centered around the McCain Mall. This time around, we stopped at Old Chicago Pizza and Taproom to taste a few of their numerous options. Workers opened the doors to the restaurant for us, a gracious gesture when one is trying to corral a toddler inside a building. We were sat and served immediately.

We started out with a trio of Old Chicago appetizers. OC’s Artichoke Cheese bread were thick and crunchy pieces of ciabatta brushed with garlic butter. On top of that, a goodly amount of artichoke dip and cheese added a rich heartiness that did much to slake our hunger before the entrees were presented to us. The fried spicy pickles were crunchy while keeping the pickles crisp and were paired with ranch dressing. The parmesan garlic fries were crisp and piping hot. As one may imagine, Old Chicago has a number of pizza options. While we did ultimately choose one – the Italian Grinder – there are a wide variety of other entrees that Old Chicago offers. One may opt for one of Old Chicago’s pastas, a variety of burgers & sandwiches, or go for a bit more healthy of a meal with their Garden Fresh Salads.

The Italian Grinder Pizza is a must-have. The butteriness of the pan crust and thickness of the dough made the ample amount of different meats – pepperoni, salami, Italian sausage and veggies (red onions, garlic, red peppers, pepperoncini) work. Each slice felt as if it weighed a pound. Old Chicago’s Tuscan Chicken and Spinach pizza was a nice change-up from the Italian Grinder, in that the conception of pizza was changed; This pizza included a lemon garlic sauce that highlighted the tomatoes and spinach, while large chunks of chicken meshed well with the roasted garlic. The variety of flavors that came forth during this pizza made it a fun experience; no two bites were the same!

The Hangover Burger was a high-water mark for our meal. The burger came out perfectly to our specifications, no mean feat since the preparation included a well-done hash brown and an egg cooked over easy. The crunch from the hash brown and the silkiness of the eggs melded with the burger to make something that could easily be housed in just a few bites.

We were astonished at their beer and alcohol selection. As craft connoisseurs (check our our beer review section), it pleases us to see a restaurant have such a deep, local-focused tap list – the day we went, Stone’s Throw Biere De Gras and Ol Razzle Dazzle, Core’s Jet Fuel, and Brick Oven’s Trouble Horse were all being served. We were doubly surprised to see a few high gravity stouts and darker beers on tap, too. Of course, the restaurant has a number of canned efforts that run the gamut from scotch ales, pale lagers, irish reds, and witbiers. To finish off our experience at Old Chicago, we were treated to a pair of desserts. Our daughter got a generous scoop of vanilla ice cream drizzled with chocolate syrup, while we got the Brownie Bites. The Brownie Bites were crispy on the outside and nearly gooey on the inside; the chocolate fudge sauce was able to transform the dish from merely decadent to something amazing. Old Chicago has something for everyone. The wait staff was tremendously friendly and more than patient when our daughter melted down. There are a variety of different specials the restaurant offers, ample televisions to watch sports, and enough options to continue coming back for years without experiencing everything that North Little Rock’s Old Chicago has to offer.