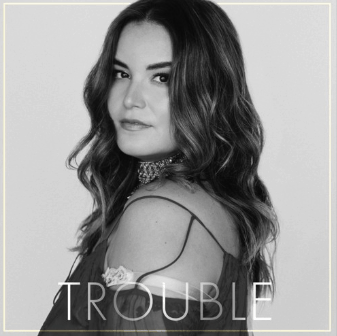 Reina Mora’s first single from her debut album Bird’s Eye View is the invigorating “Trouble”. She wisely doesn’t aim for remaking the musical wheel with her first single release, but Mora does prove herself quite skillful at pouring old wine into new bottles with her mix of light atmospherics, an evocative performance both vocally and from the supporting musicians, and a definite rock attitude coming through the song. Working out of the Los Angeles area, this young talent sounds like a performing artist fortunate and talented enough to have discovered her “voice” with this first effort and possesses the ability to go anywhere she wants from this point forward. Mora is a gifted interpreter and these skills likely manifest themselves even more vividly onstage – if so, the times suit her exceptionally well and there’s a long career awaiting her. She certainly has the talent in spades.

It comes across from the first. Even in the comparatively sedate opening minute of “Trouble”, Mora comes off as a masterful singer with full knowledge of her to use her terrific voice. She carefully follows the arrangement along and escalates her voice in accordance with the gradual layering of detail and mood. She effortlessly moves into another realm entirely with the song’s chorus and its rockier passages; there’s no question, even if she hadn’t written this tune, she damn well means every word. That sort of authenticity is something you can’t teach and it helps make “Trouble” an even more spectacular debut single. The guitar work and percussion complement her voice quite well and it never challenges her for a central role in the performance. The seamlessness between the various elements is admirable and never relents throughout the entirety of the tune.

The lyrics are quite sharp without ever overreaching. Mora conveys her intense connection to the song’s subject matter without ever laying on the effects too thick for listeners and the mature approach to her craft further distinguishes her from the pack. Let’s not be mistaken however – maturity shouldn’t denote staidness for listeners. This song crackles from the first, turning from a slow burn into a full on inferno, and is entertaining listening that nonetheless shows tremendous intelligence and raw, unvarnished talent certain to carry her far. “Trouble” is a note perfect way for Mora to begin her career and there’s little doubt that the remaining contents of Bird’s Eye View is equally set to make a big impression on listeners. The power and highly individual content of this single isn’t quite like anything else that’s landed recently and announces the arrival of a first class talent with boundless potential. Get in with this early while you can, because Reina Mora’s career is likely to rocket away from the start.