Severine – Down the Rivers 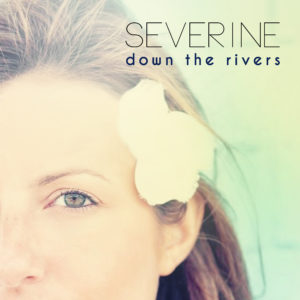 Vocalist/multi-instrumentalist/composer, Severine is a lot of things but one thing she wasn’t until now; a solo artist.  “Down the Rivers” is her second single after a life filled with travel (both national and international), touring and recording with bands and finally deciding that she was ready to take the next step as a musician.  With so much recording software out there, it’s empowering because everyone can take steps to record their music.  Sadly, many don’t but that’s where Severine decided she wouldn’t rest on her laurels.  After toying with writing her own material, she set about tracking it on the recording program Ableton which laid a foundation and blueprint for her career’s most important phase.

Locking down producer extraordinaire Anthony “Rocky” Gallo was the next coup in preparing this single.  Gallo has spent a lifetime rising up through the production ranks and he’s recorded and mixed everybody from Jon Bon Jovi to John Legend.  He’s worked with rap (Common), singer/songwriters (Norah Jones) and has cemented himself as a go-to-guy for anyone that can muster up the material for him to sink his teeth into.  “Down the Rivers” is a veritable musical meal that progresses through several passages of soft, plaintive verses with subdued synths, soothing symphonic arrangements and melodic vocal restraint.  It’s not a single-minded track at all though because whenever Severine hits that monstrous, winding chorus movement the keyboards rise into tidal plunges of harmonic glory, distortion adds cadence to the phrasing, the hard-hitting beats crash without being too busy and her vocals hit mountainous peaks.  It’s a startling debut because it feels like the work of an entire band but really this is Severine’s complete and total composition as audibly realized by Gallo’s magnificent production.

Tiring of the band life and already getting a taste of massive geographic exploration in terms of performing (with shows in Paris, Mexico, Montreal, etc.), Severine has finally settled down in New York City after living for nearly 2 decades in her family’s country of origin, France.  The serenity and rich creative atmosphere of Paris gave her a chance to become proficient in singing, piano and the guitar, with the tranquil artistic atmosphere of the country giving her plenty of time to practice and develop her skills in a wide breadth of musical fortes.  Once returning to American soil she spent her time as part of an indie-pop duo that focused on synthetic/keyboard arrangements.  Though the inspiration and influence of that sound stayed with her, she felt that somewhere she was being held back.

Paired with the success of her first single “Not Obsessed”, “Down the Rivers” is exactly the single that will accelerate the launch of Severine’s music into the stratosphere and with the quality displayed it should win her over numerous fans.  The writing is immense, the delivery airtight, the production polished and her singing displays several decades of chop-building and melodic comprehension.  It’s deep, though catchy, and avoids pop cliché for a very lush, organic tunefulness that clearly illustrates the best music is still and will always be a true work of art.