The Fratellis – In Your Own Sweet Time (Cooking Vinyl) 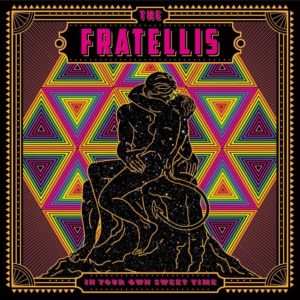 Since their debut just over a decade ago, Scottish alt pop band The Fratellis have been churning out infectiously catchy pop, with enough jangly guitars and power chords to appease the indie kids, but also boasting a much wider appeal. And “In Your Own Sweet Time,” their fifth record, is no different.

From the first track, the irresistible “Stand Up Tragedy,” throughout nearly the entirety of the record, the band keeps up the momentum. The only low point is the slow tempo album closer, “I Am That.” Excluding that lone track, The Fratellis manage to top an already strong track record, turning in their most satisfying album yet.

The band had help from producer Tony Hoffer, who’s diverse CV includes work with Beck, The Kooks and Belle & Sebastian, among others, adding to the eclectic nature of this record that draws influences from a slew of different genres over several different decades. It’s not hard to imagine everything from Gang of Four to Supertramp being played as psych up music as the band prepped for recording.