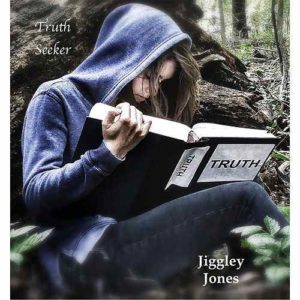 Jiggley Jones’ single “Truthseeker” Is a standalone release every bit as worthy of attention as his preceding two EP releases and current full length album release Not Your Typical Day Out. It embodies the same songwriting and performing virtues existing as a hallmark of his work since first debuting in 2012 with No Spring Chicken and comes with an accompanying video that further fleshes out Jones’ already vivid songwriting while dovetailing into the same tasteful, spot on artistry manifested in the cut. Jones is a complete performer, a likely product of his life experience, but more than likely a testament to simply the singular presence he enjoys in the increasingly tighter circles of the folk rock community. He’s a true talent that transcends the genre’s relative narrow confines and, instead, writes songs that cast their reach far beyond for those willing to share in his ride.

The video, in some ways, shows off the same solid construction distinguishing the songwriting. We’re treated to a brief preamble and coda without music before the song begins and later ends and, clearly, there’s every attempt here to position the video as every bit as important of a storytelling statement as the music and lyrics themselves. Each component becomes crucial to the overall experience. The video quality is quite outstanding and the transitions between shots are manipulated in a way illustrating hiw Jones clearly, in the end at least, knew what he wanted for the video. The greens and blues of the video’s visual palette complements the musical color as well and the aforementioned cuts often seem timed to turns in the music – this alone makes for a more satisfying experience all around. Outside of brief shots of Jiggley himself, the video’s one actress has no lines but discharging her part of the storytelling duties with presence and genuine emotion communicated to viewers. She perfectly embodies the spirit of the song without any apparent strain.

There are only a few musical elements that make this song work, but they are orchestrated with such an ear for atmospherics and effect that they add up to more than the sum of their individual parts. His juxtaposition of ear catching percussion with clearly folk styled guitar work makes for an excellent mix and the lightly polyrhythmic flavor of the  drumming is an unexpected treat. Much like the video, “Truthseeker” begins and ends in a manner that illustrates Jones’ strengths as a craftsman of songs without sounding overly stagy or pandering for your attention. The power of this single is apparent from the first and the video, understated yet deeply dramatic at key points, underscores the cut’s virtues. Jiggley Jones’ “Truthseeker” is an artful and fulfilling bit of folk song craft powered by a small array of instruments who know exactly what to do. The intimacy and inventiveness of the performance never shouts; it doesn’t have to. This is a song that, instead, gets under your skin with a minimum of fuss and stays there.