The Last Gang – Keep Them Counting 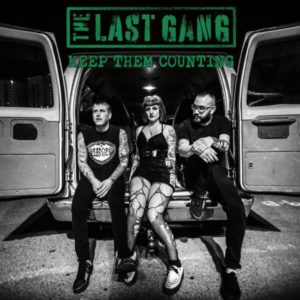 The Last Gang split up for a bit in 2009, having lost momentum and the energy to get going again. But thank the gods of punk rock or whatever deity you want to credit, singer/guitarist Brenna Red and drummer Robert Wantland roped in Sean Viele to take over on bass and The Last Gang gave it another go.

Keep Them Coming is their first album following last year’s stellar debut 7”, “Sing For Your Supper,” and is more than enough proof that The Last Gang is one of the best thing’s going in music right now. The LP is a relentless, infectious punk rock, that’s not afraid to cram in hooks alongside the singalong choruses. With the opening track, the hauntingly powerful “Sing For Your Supper,” the band set a remarkable pace that they somehow manage to keep up across 10 songs. Red’s vocals are amazing (sounding more than a little like Joan Jett) and anchor the songs brilliantly; the level of emotion she’s able to relay with just the two-word chorus on “Blood Drunk,” for example, is simply impossible to ignore. From the ferocity of a song like “Nobody’s Prostitute,” to a more pop-infused jam like “Identity” or the album closer, the acoustic “Secret Sounds,” The Last Gang shows a depth and range that it takes most bands shelves of albums to prove.