Lord Nelson – Through the Night 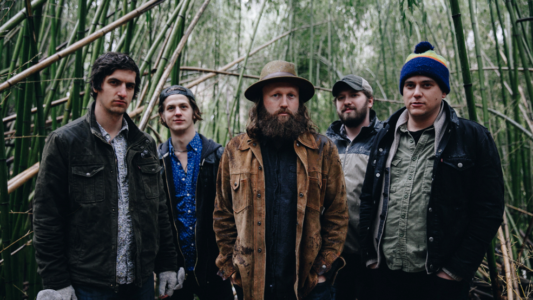 Ghosts of lost lovers and dreams dashed litter a broken trail from motel, to roadhouse, to Rocky Mountains and beyond. This is what the cold night holds in store for us that on Lord Nelson’s first studio album Through the Night. American and British fans alike will find solace in the blistering blend of rhythmic blues rock to behold here. Their reputation on the road these last few years has been nothing to joke about, but it wasn’t until producer Dave Stipe brought their grooves into high definition that the audience can finally experience the complexities of this Virginia outfit’s sound.

Virginia is for lovers, and along her vast countryside fans will find the tombstones of all Lord Nelson’s past flames. In a record that plays like a gripping southern chapter play, shoegazing guitars find a friend in gothic organ moans, and a steady drum beat that shifts our awareness to the ever-funky bass. Whether matters of the heart break down into chasing after her (“Second Chance”) or giving into lust and dangerous with someone new (“Fingertips”) the Lord encourages us to take that chance, break the rules and embrace the haze. Sure, you can go home again (“Running on Back”), or stay home and ache to be something you aren’t (“Black Hills”), or even stagger through your uncertainty until you find some comfort in people who make a new home for you (“Call Me”). This is folk rock for a new generation, inspired by soul and rooted in southern grit. In a time when introspection is hardly promote, an album like Through the Night is what has been desperately needed in the music community, from East Coast to West Coast.

Classic rock is a term often too-broadly applied to rock n’ roll bands of decades past, when really what the term ought to embody is the sheer thrill of pounding drums, thundering guitar and euphoric vocals. Lord Nelson not only prove that classic rock is alive, but that it can be modern, culturally aware music (without getting full of itself or overly P.C.). Sure, there’s a lot of pride here. And in that pride we find five gentlemen deeply committed to their art form, layering horns, strings, percussion into a crashing wave of sound. They don’t mind wearing their influences on their sleeve (Johnny Cash, Tom Petty, Oasis, Clutch, Drive-by Truckers, even a taste of Colorado jam bands like Full Style Swing), but all of it meshes together seamlessly, like a cool playlist in a dusty diner somewhere.

The Country, the band’s self-released debut record, established Lord Nelson as your standard house band, but with an edge. Their juggernaut live performances made them eligible to command respect, and in this latest album, with all it’s professionally-produced might, we see the band fully evolving into a formidable act; diversifying in sound and ability, and capable of humility while still maintaining a masculine rock n’ roll scream. Those tombstones you’ll pass in the 42 minutes that Through the Night runs won’t haunt you, but the inward looking gaze of Lord Nelson’s poetry most certainly will.

For more info on these guys, check out their website (lordnelsonband.com) and try to catch them live. If I took away anything from this album, it’s that this is definitely just the beginning for this Virginia crew.

Lord Nelson – Through the Night