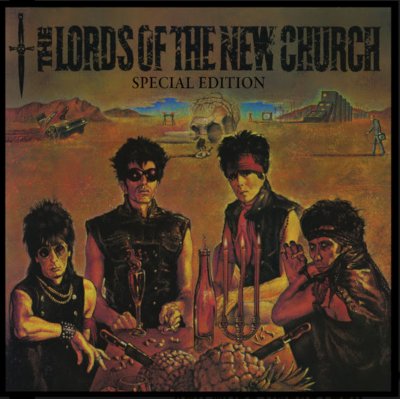 Arguably one of the best punk rock/goth supergroups of all time, The Lords of the New Church was sadly close to being forgotten by an entire generation. Comprised of Dead Boys singer Stiv Bators, Brian James from the Damned, Sham 69’s Dave Tregunna, The Barracuda’s Nick Turner and occasionally the Damned’s Rat Scabies, the band’s fantastic 1982 self-titled debut mixed punk rock, British goth and some of the earliest hints of industrial music, all crammed into a tight 10 songs. You can hear their influence all over bands like Gene Loves Jezebel and Flesh For Lulu. And despite the influence of that album, you had to do some digging online to get a copy.

Blixa Sounds just re-released this important record in an impressive 2-CD set. Along with the 10 original songs, they have tacked on three bonus tracks and a separate live album from a 1982 club show in New York. The original album is an impressive in the way the band covers so much ground in such a short span of time. Though they each came from powerful groups, they are easily better musicians by the time they formed Lords of the New Church. Bators has learned how to control his voice and the musicians have all evolved way past the basic power chords and rudimentary rhythm sections that came to define the early days punk rock. The live album here is a great snapshot of the band in the first few years of existence.

Though there are a couple of weak tracks here that didn’t age well (in particular the sophomoric “Eat Your Heart Out”), for the most part the band creates a rich, truly inventive sound on this, their first record. It’s not hard to see why this became a fan favorite. This special edition re-release also includes a 12-page booklet with linear notes from journalist Craig Rosen, who first interviewed the band for his college paper.