The Wires – Diligentia Quam in Suis 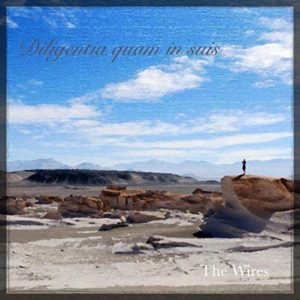 Carillon is the first track on The Wires’ new album Diligentia Quam in Suis. The song is soft and sedate, with The Wires weaving in soulful singing with contemplative instrumentation. The band is not afraid to allow for longer instrumental interludes on the album, a decision that provides ample gravitas to the vocals when they do enter into the fray. A Man on Wire draws upon the singer-songwriter style of the 1960s while sprinkling in hints of Phil Collins and Cat Stevens. While the song needs little more than vocals and a guitar, it is so honest that it will permanently impress itself in the minds and hearts of listeners.

Dance of the Witches has The Wires going into a bold new direction. The tempo is a bit more insistent from the onset. The strings / guitar dynamic is rich and close-knit, providing the perfect sort of highlighting to the depth and earnestness of the vocals. As the track picks up speed, both vocal and instrumental sides combine to make for one of Diligentia Quam in Suis’s most alluring singles.

A Fall Song has the band skillfully use repeated arrangements (guitar / bass) to establish a sense of routine to the relationship being discussed by the vocals. This touch of realism is something that few bands can perfect, but The Wires does so here.

Diligentia Quam in Suis concludes with The Pilgrim; the effort (which features Bandito) is paired with Yes Hay Em and Now I See as the extents of the band’s sound. A slower, more intimate sound of the latter pair is countered nicely with The Pilgrim. The bouncier sound of the track and charisma of the vocals provide an emphatic ending to the release.

Top Tracks: A Man on Wire, Dance of the Witches