VIKINGO! – Set It on Fire EP 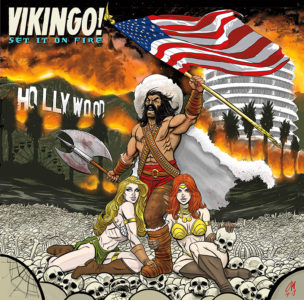 We reviewed the lead single from VIKINGO!’s new EP, Set It on Fire, a few months back. We were quite happy to learn that the rest of the EP continues with the same care in arrangements and fire present in each lick and drum beat that is inserted within this release.

One Man Town is a grungy effort that straddles the line between 1970s rock, the new wave of the 1980s, and the angular rock of Franz Ferdinand and The Bravery. The band’s guitar work and inimitable vocals interact well with an emotive bass line and on-point drums. With guitar work that builds off of the aural approach of Static-X and Bad Religion, VIKINGO! are able to showcase some serious chops alongside a cohesive and coherent approach to the band’s arrangements. Lush and with a surprising level of complexity, Make Up Sex is a song that we’ll be playing at NeuFutur well into the winter months. Love the falsetto voices that are interspersed into the track at about the three-minute mark.

Make Up Sex whips in hints of reggae and funk to make something that is taut as all get out. While the vocals are a focal point to the cut, I feel that the guitars/drum/bass dynamic may be more of an allure. The composition is so deep, so knotty that listeners will continue to unearth more twists and turns even multiple plays in. Take the best parts of Fugazi and The Mekons and you have a bit of an idea what’s going on with VIKINGO! this time around. With everyone on their game, it’s no surprise that we were singing along with the single the second and third play-throughs we put Set It On Fire through.

Top Tracks: Set It on Fire, Make Up Sex