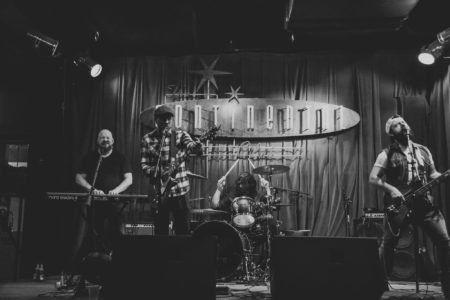 The absence of the one that got away is hard for even the most gifted of poets to describe, but country rockers The American Revival come pretty close in their all new single “Whiskey Kisses.” The second glimpse into their forthcoming debut album, “Whiskey Kisses” digs deep with its lyrics, illustrating the feeling of yearning through a series of mammoth melodies that intertwine and create an evocative, unforgettable tour de force in just under five minutes of play. The American Revival might be a new face in the game, but they prove here that they’ve got the chops to dish out memorable musical gems that stand out next to the competition.

In the chorus, listeners are bluntly confronted with the song’s central melody which, not unlike an embrace from a long lost lover, is brilliantly warm and inviting. The vocals harmonize together and reverberate against the oaky backdrop being created by the guitar, piano and gentle percussion; this is a slightly atmospheric mix when we examine it closely, but the instrumentation feels remarkably insular thanks to the clarity in the EQ. There’s just enough contemporary varnish to distinguish this from a more vintage sound, but make no mistake about it – The American Revival are sporting a classic strain of Americana in this single that is seductively smooth from start to finish.

Rhythmically “Whiskey Kisses” is a very patient track, symbolically looking back at the past as much as the protagonist of the lyrics is. There’s a constant feeling of retrospection that is inescapable whether we’re tuning in to the verses or the sway of the music. The vocals are so elegantly faceted inside the fabric of the song that it’s almost hard for us to tell where they end and the melodic chime of the keys begins. Emotion is the biggest component in cultivating a signature sound (for any artist), and despite not being together very long The American Revival seem to have their identity completely pinned down.

The string parts in this song are unabashedly decadent and larger than life, but they never stretch beyond their meticulously crafted boundaries thanks to the tempered simplicity of the grooves. As we wade through the ocean of melodies flowing from the guitars, it’s the drumming that sweeps up the mess they leave in their wake. On stage this ballad could easily take on the form of a much more anthemic rock song, but as it’s presented to us here we get to really experience The American Revival at their most relaxed and passionate.

Along with their first single “On My Way,” “Whiskey Kisses” is a fantastic introduction to the exciting brand of alternative country that The American Revival bring to the table. Their rookie release is expected to reach the masses early next year, but for fans of Americana who can’t wait that long this single is a fine way to get to know one of Austin’s more intriguing emerging acts of the last few seasons. They’ve set the bar pretty high for themselves with this number, but something tells me we’ve only just begun to appreciate the magic that there capable of conjuring up in the studio.