THE GERMS – What We Do Is Secret [RSD Black Friday Vinyl] 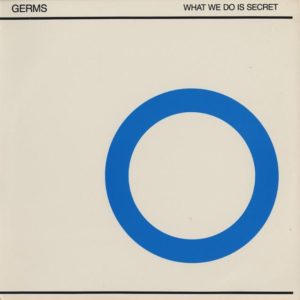 The Germs may have only released one proper studio album before frontman Darby Crash died, but you’d be hard-pressed to find more than a handful of more influential hardcore/punk rock bands to come out of that era. Everyone from the Minutemen and L7 to Soul Asylum and Pennywise owe a debt of gratitude to that Southern California band of nonconformists. So, it’s frustrating just how few songs the band managed to record during their four years together.

Thankfully, ORG Music has just re-released this gorgeous blue vinyl limited edition copy of their 1981 EP “What We Do Is Secret”. Originally put out in 1981, just a year after Crash’s suicide, this 7-song album pulls together live tracks recorded between 1977 and 1980. The songs are sloppy, loud, a bit amateurish, all which add to the odd brilliance of the band.

Their cover of Chuck Berry’s “Round and Round” is one of the highlights of this mini-album that hovers around the 20-minute mark. The last two songs in this collection, “The Other Newest Ones” and “My Tunnel” captures the band playing a frenetically impressive live show on December 3, 1980 at LA’s Starwood. The songs show a band that was destined for much bigger things, but sadly, Crash intentionally OD’s on heroine just a few days later.

Unlike The Eagles or Steely Dan, polished studio musicians searching for perfection, a band like The Germs were about immediacy, spontaneity, and living that ethos that anyone (literally anyone) can be in a band. And while The Eagles and Steely Dan may have found a much, much bigger audience, they manage to do so without a fraction of the passion that a band like The Germs had.

THE GERMS – What We Do Is Secret [RSD Black Friday Special Edition; Blue Color Vinyl]/ORG Music & Rhino/2018
Please follow and like us: