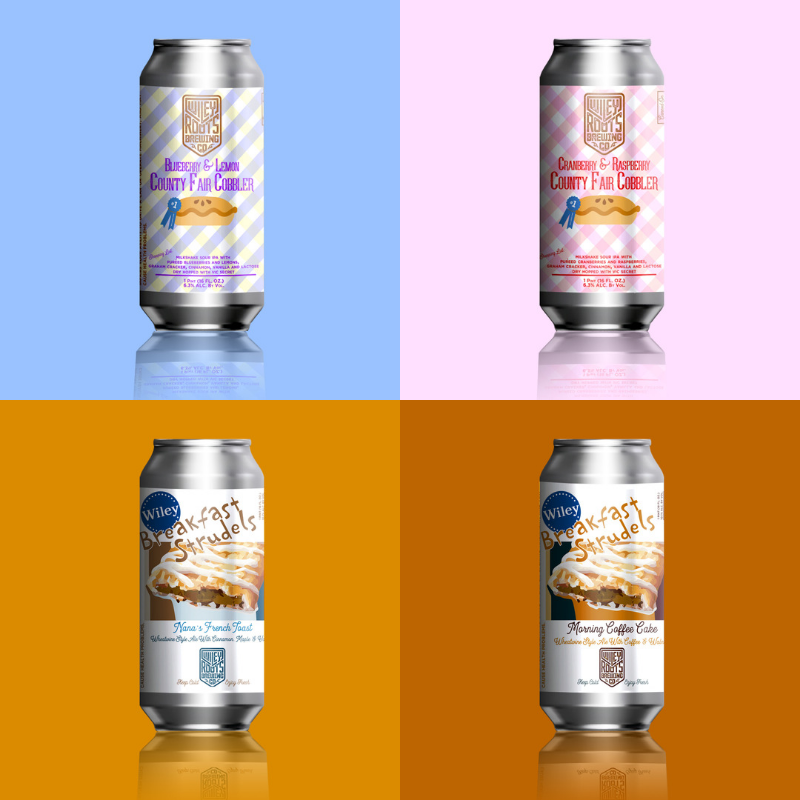 This release will focus on a growing trend in the craft beer industry of breweries using dessert adjuncts to produce flavors and aromas inspired by pastries, candies, and other sweets. For years, breweries have been making stouts inspired by desserts like cakes, cookies, and pies, earning the name “pastry stouts” by Alex Kidd, founder and editor of Don’t Drink Beer, an online satirical beer review site. Recently, this trend has expanded into other styles, most notably the New England IPA, Milkshake IPAs, and Sour IPAs. Wiley Roots expanded these styles to create a cobbler inspired series of Milkshake Sour New England IPAs called: County Fair Cobbler, which were inspired by Hudson Valley Brewery in Beacon, New York, a brewery known for their innovative Sour IPAs. After the second County Fair Cobbler release, Wiley Roots received national attention, which quickly increased demand. To meet this demand, Wiley Roots has been releasing one to two new variants every month since November, quickly selling out after each release.

Along with pastry inspired Milkshake Sour IPAs, Wiley Roots has found success in applying the same principles to a wheatwine base beer. Wheatwines are similar in style to barleywines, but have a softer mouthfeel that is less sweet. This concept was used to create another pastry-like beer series inspired by Pillsbury Toaster Strudels: Breakfast Strudels. Breakfast Strudels are breakfast pastry inspired beers created to experiment with pastry adjuncts, by balancing high alcohol, moderate bittering hops, and a semi-dry finish, the brewery is able to add rich, decadent, and bold adjuncts to each beer.

Customers hoping to take beer home are encouraged to attend the release this weekend, as each previous release has become more popular, limiting the amount of time cans are available to-go. County Fair Cobbler kegs will see some distribution within the Denver-metro area to select accounts, but will also be limited because of the size of the brewery. Breakfast Strudels will not be distributed.

Wiley Roots Brewing Company believes beer should be unique, crafted from the highest quality ingredients, and brewed with a sense of responsibility to the craft and to the surrounding community. We believe that brewing craft beer is an art and that it should be grounded in the core values of honesty, integrity, hard work, and the belief in one’s ability to create and share. We are a small, independently owned brewery with a unique focus on mixed-culture, barrel aged, and spontaneous beers in downtown Greeley, Colorado. Our beers have been awarded medals at the Great American Beer Festival in 2018 (Silver), 2017 (Gold), 2015 (Gold), 2013 (Bronze), and 2017 (Silver) at the Mazer Cup International. Wiley Roots Brewing Company was founded by Kyle Carbaugh and Miranda Carbaugh and opened in the summer of 2013.