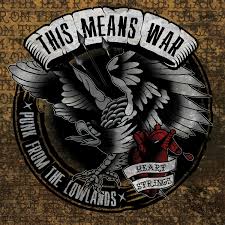 Heartstrings, the debut full length from Belgium punks This Means War, easily proves that the band’s self-titled EP wasn’t simply a fluke. Across nearly a dozen tracks, this five-piece, teeming with a solid pedigree of influences from Cock Sparrer to the Bouncing Souls, turn in a wonderfully catchy, anthem-ready album that has all the trademarks of a modern punk rock classic. Taking their name from a 2014 Old Firm Casuals record, that influence is also locked down tight, as well here. In fact, they deftly cover the band’s “Off With Their Heads” at the end of Side A.

The songs each matching the previous one’s level of energy and intensity, hues closely to traditional punk rock themes (We’re all in this together; Fighting the Powers that be; etc.) and that’s part of the charm of this record. Unlike a slew of modern bands from the genre who seem to think punk rock began with Green Day and Blink 182, This Means War seem to be taking their cues from classic ‘70s British Oi bands and their American acolytes.

Songs like the rowdy “Devil in Disguise,” and “Why We Fight” manage to be standouts on a nearly flawless record, but it’s the album closer, the sing-along “Forever,” that cements this band as one of the most exciting things to come out of the European punk rock scene in years.