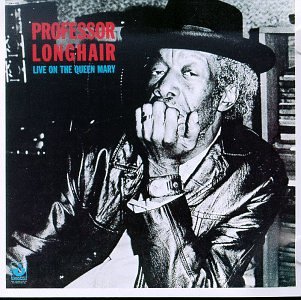 Just a year after the release of his 1974 comeback album, Professor Longhair – arguably one of the Big Easy’s most important exports – played a remarkable show on the deck of the Queen Mary, docked in Long Beach, CA, at party hosted, oddly enough, by Paul and Linda McCartney. That March 24, 1975 set was recorded and released a few years later and would go on to help the good Professor find an entirely new audience.

Sadly, he died in 1980, but throughout that decade many of his long out of print recordings found homes on a number of different records and compilations. Harvest, the label that initially put out Live On The Queen Mary in the ‘70s has just re-released the album on CD as well as on a remastered 180 gm vinyl format, and if there is any justice a whole new audience will discover Professor Longhair.

This reintroduction of this record – the alpha and omega of his career – highlights just how amazing Henry Roeland Byrd was at bringing New Orleans jazz to the masses. His style, combining his relaxed vocals, with his almost-frenetic piano playing is still amazingly original almost five decades later. Hearing him whip through classics like “Mess Around” and “Every Day I Have the Blues” and easily remaking them into his own, as well as singing his own songs, like “Mardi Gras in New Orleans,” (a track that many more would go on to cover for the next several decades), is still a sublime feeling.