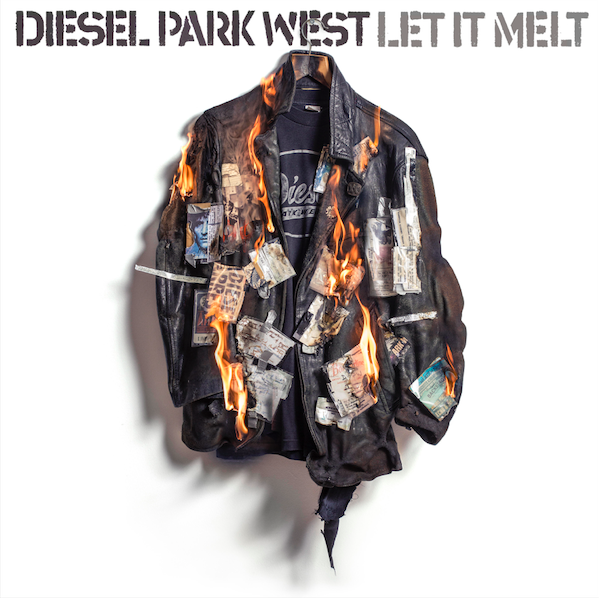 “Let It Melt”, the first and title track from Diesel Park West’s ninth studio recording, serves notice this venerable UK outfit is showing no signs of slowing down. Thirty plus years in the music world are defined by impressive peaks and challenging fallows, but Diesel Park West kept the flame burning throughout thanks to the bonds of shared experience and a passion for their craft. Let It Melt is their first release on a new label, Dallas based Palo Santo, and the first song announces their enthusiasm for a new start with the same raucous edge often characterizing the band’s strongest material. Vocalist, chief songwriter, and guitarist John Butler commands your attention on this track.

“No Return Fare” mixes the band’s direct rock guitar approach with acoustic rhythm guitar laying down meaty chords under the surface of the mix. Butler goes in for social-oriented songwriting at various points during the course of Let It Melt, but he never has a heavy hand for such moments and manages to even temper it with a wry appreciation of the difficulties we face in modern life.

“Everybody’s Nuts” has a great title that gets right to its point and the songwriting backs it up all the way. It’s Butler’s bemused and incredulous take on dealing with people but it doesn’t have a nihilistic bent – he finds humor it and the song’s arrangement gives it a dramatic quality that’s sure to engage audiences. The guitar work from Butler and Rich Barton rates among the best on Let It Melt. The humor carries over into the next track “Living in the UK” but, despite centering the song lyrics on what it’s like living in Modern England, American listeners can relate to this track as well. It has a blues influenced tilt, like much of the band’s material, but remains warm and inviting all the while.

They turn up the heat to full on boogie with the track “Bombs Away” and Butler’s impassioned vocal more than keeps up with the energetic pace. Barton and Butler are an outstanding guitar team, but the rhythm section of bassist Geoff Beavan and drummer Rob Morris really stand out here. Diesel Park West move much closer to the blues on the album’s ninth and tenth songs, “You Got the Whole Thing Wrong” and “Across this Land” respectively, but there’s more outright humor heard in the latter tune than the former. Harmonica and piano play prominent musical roles in “You Got the Whole Thing Wrong” and it’s another song that seems ideal for live performance.

“Across this Land” has a strong blues influence as well with acoustic slide guitar built into the track and it underlines the strong vocal relationship between Butler and Barton – the whole band is important, without question, but these two seem to share a special musical bond that you hear recurring throughout the release. It’s a bit of a cliché to call Diesel Park West survivors – they have continued all these years because of commitment and talent, not good fortune. You should think of them instead as grizzled and tough. They’ve shrugged off the slings and arrows of outrageous fortune and sound as connected to what made them pursue their musical dreams as they did during their long ago 1980’s heyday. Let It Melt testifies to that fact and then some.