The Messenger: The Songwriting Legacy of Ray Wylie Hubbard 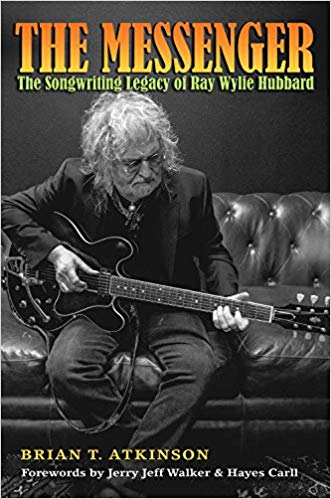 Ray Wylie Hubbard may not be top of mind to casual Country/Americana music fans, but he certainly influenced a slew of the musicians making that music today.

It seems rather appropriate then that Hubbard’s peers and acolytes would come together to explain his musical brilliance in writing. The Messenger, though not the best book to explain the life and career of Hubbard (that one would be his own 2015 memoir, A Life… Well, Lived), it does a pretty solid job of explaining his appeal by those who know him best. Chronicled by Brian T. Atkinson, the book collects an army of interviews from friends, peers and followers; folks like Bobby Bare, Steve Earle, Ben Kweller and Chris Robinson, among many, many others. But the most touching tributes come in the forewords, by longtime pal Jerry Jeff Walker and relative newcomer (at least compared to Walker and Hubbard) Hayes Carll. One of the best stories recounted here is the 1973 live version of Hubbard’s “Up Against The Wall Redneck Mother,” covered by Walker on his live album with a shout out to the song’s author in the intro, a move that brought a lot more attention to Hubbard’s own work.

The book covers his early years, playing folk music in college as part of Three Faces West, and his evolution to a folk/country singer songwriter on par with Walker, Kris Kristofferson and Guy Clark. Like his memoir, The Messenger is pretty frank about his substance problems drawing a clear distinction between his pre- and post- sober career.  A strong book, paired nicely with A Life… Well, Lived, this latest entry in the Hubbard library is further proof of just how influential his music remains today.