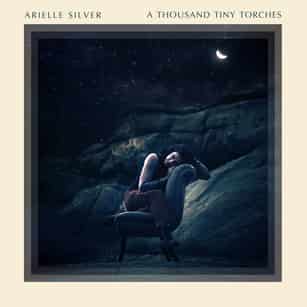 You Were Light is the introductory effort on Arielle Silver’s A Thousand Tiny Torches. Rich vocals immediately wash over listeners, as Silver builds upon the tradition of performers like Carole King and Sarah McLachlan. The guitar work calls to a different style, adopting the trappings of 1980s and 1990 country. The rising and falling sections on You Were Light keep fans firmly planted on the edges of their seats. There is a confident, driving approach adopted by Silver during What Really Matters. With crystal-clear lyrics weaving considerable narrative depth, Silver creates an effort that could easily garner playlist attention. The ability of Arielle to create music on A Thousand Tiny Torches that will appease music aficionados and individuals just wanting something catchy is unmatched, with further evidence continuing to accumulate through this LP.

Only Forever provides listeners with an intimate look into Arielle’s music. This careful and calm composition needs little more than a piano and guitar to provide proper drapery to her vocals. While the song continues to gain a bit of gravitas as it continues, this first minute (or so) is some of the most bare we’ve heard Silver so far.

Someone Else’s Dream refreshes the 1990s style of a Natalie Cole or a Sheryl Crow to a brilliant luster. The instrumentation and vocals here are able to continually swap places to provide equal highlighting to both, making for an extremely well-balanced single.

Laugh About It and The Calling are vital tracks for proper appreciation of Arielle’s musical abilities. The two efforts strike at considerably different styles with Laught About It representing more of the upbeat and driving pop-rock approach and The Calling more of an narrative and introspective style. A Thousand Tiny Torches is a deep and broad album, with as many approaches as there are distinct statements contained within.

Top Tracks: You Were Light, Someone Else’s Dream