“I Carry On” by Francine Homey 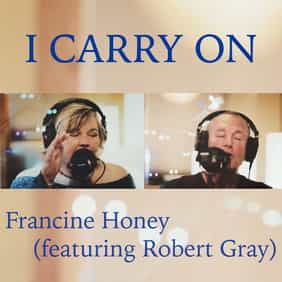 There aren’t many independent players in Canada that have the kind of buzz that Francine Honey has going for her right now – and justifiably so. Honey has been on a whirlwind ride through the last three years, and in 2020, she’s taking all of her professional knowledge and hammering out one of her best performances yet in “I Carry On.” “I Carry On” is being released as a double single, with one version sporting a solo performance and the other adding in Robert Gray for a decadent duet, but outside of the colorful vocal differences, they’re essentially the same magical song out this spring.

Even amidst the surreal nature of both music videos for “I Carry On” – one in-house and musician-themed, the other more contemporarily cerebral and artsy – the dynamics that Francine Honey is bringing to the music with her here is always the centerpiece. The same can be said for the version featuring Gray, which is possibly even more well-defined because of its fascinatingly uncut nature. Honey was clearly trying to advance a point to critics with this release – she isn’t interested in being pigeonholed as a Canadian country singer/songwriter; she’s an artist of multilayered talents who can play with whomever and whatever she pleases.

The percussion gets to be a little much in the solo mix, but at the same time, I can understand the concept producers were trying to achieve here. There hasn’t been a lot of physicality among this type of content in the last few years, and by tossing in a bit of brawn where we’re least expecting to find it, we’re given all the more opportunity to appreciate Honey’s vocal for the soft, ethereal force it can be. This is a vocal showcase, and even through instrumental intricacies, it highlights what it was meant to.

If you’ve never heard the music of Francine Honey prior to now, I would seriously recommend starting off with this latest pair of tracks. “I Carry On” is a great way of getting to know her artistry in all of its many-splendored glory, and even though I don’t think it will be the last hit she scores with critics like myself, it’s a good benchmark for her career moving forward. I like her style a lot, and with more collaborative projects with cats like Robert Gray, she’s going to hear even more praise than she has in the last half-decade of her work.