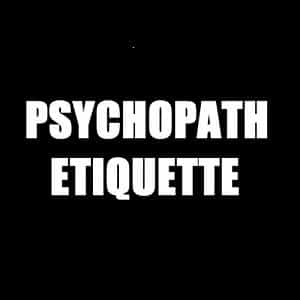 Rough Draft, by Psychopath Etiquette, is the debut EP of the songwriting duo of brothers David and Paul Sprague. The Southern Maine based siblings have their own unique blend of folk and rock which make up the indie vernacular between them. They are a group formed out of necessity of needing to see where their ideas can take them after years of their own individual journeys in the music world, coming together on record for the first time. The results are nothing short of excellent, but it’s not without understanding the lyrics as much as the music of these artist brothers.

The music is fresh and vibrant, but folk subjects can have their wooden moments because it’s always a take or a story and you have to pay closer attention to this and most acoustic music or you miss the beauty of it. “Trash (Treasure)” is a moment of such beauty but if you don’t stop to smell the roses along the way you could miss it because it is nothing like the following track. It does make way to the more adventurous “Life” though, as it tends to rock more and keep you hoping for more of where it comes from.

I jumped around on this EP the first time I heard it, but it goes to show it plays on shuffle as well as in normal succession, but it also begs to be heard in succession. You can’t go wrong if you have the time and take the time, as “All My Time,” the next track suggests, and it is a shining track that gets my choice for the best track on Rough Draft. I only had to hear it once to really conclude that, but it takes me back for the most-amount of listens, so far. If folk and punk are any kind of combo, then “Heart Vs Head” can probably be described as that, but it doesn’t totally define their sound. They show they can swing between the genres and that is one thing to take away from a couple of these tracks. I find it to be better than carrying on like a rock opera, so it works wonders for me, even if I am not the target demographic either. Most importantly, I like how they have fun with it before going back to more serious matters toward the end of the fine track selection. APPLE MUSIC: https://music.apple.com/us/album/rough-draft-ep/id1507046499

“Show And Tell” take it back down a notch with some more of the usual on offer, which all have something compelling to offer. Nothing on this EP is out of place or does not belong. They all hold their own weight and have something substantial to say, and that’s the mark of any good debut release. The final track can be seen on Facebook in a lyric video with over 100k views and counting by the day, so “When Anxieties Attack” can also be found there for a look at the fuss is all about on this new world class indie rock and folk title.