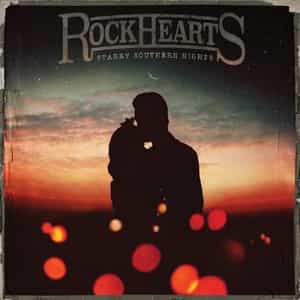 In their Ned Luberecki-produced debut album, appropriately titled Starry Southern Nights after one of its most moving tracks, Rock Hearts seek to establish themselves as melodic players who can balance the finer points of bluegrass sophistication with a homespun roots sound most anyone can get into these days, and for this critic, they hit a homerun right out of the park. In songs like the namesake and its tracklist neighbor, the agile “Whispering Waters,” Rock Hearts aren’t playing to a specific theme so much as they’re setting the tone for what should be a long and fruitful career, and with a tenacity that allowed for them to cover songs like “99 Year Blues” and “Don’t Let Smokey Mountain Smoke Get in Your Eyes” right out of the gate, you know you’re in for something special here.

There’s so much grandeur to the lead vocal in the aforementioned tracks that it’s occasionally possible to get distracted by the hypnotic harmonies in this LP, but this doesn’t diminish the prowess of the instrumental components by any measurement. The vast indulgence we find in every compositional corner of Starry Southern Nights isn’t just critically excusable – it’s downright required to make some of these lusher numbers really stand out, thus making it an important part of this band’s recipe for success.

The catharsis we find in the concluding “Stagger Lee” matches up well with the tension we’re exposed to in the frustratingly pendulous “Don’t Take It Too Bad,” and in utilizing the entire tracklist as a canvas rather than a device through which to present a flurry of different sounds, Rock Hearts actually translate with a much more progressive bend than many of their rivals do. This was a well-thought out endeavor, and you don’t have to be a critic to recognize as much.

I would love to hear this band’s take on the Osborne Brothers’ “Don’t Let Smokey Mountain Smoke Get in Your Eyes” as well as “Juxtaposed,” the title cut (soon to be transformed into a proper music video) and “Wake up and Smell the Coffee” live sometime, and I don’t think I’m the only critic feeling as much this November. Songs like these were meant to be experienced with the roar of an entire concert hall – or even just a lot of loved ones gathered around a bonfire down south somewhere – and though their studio renditions are awesome, they’re more advertisements for the real thing than anything else.

While I only just discovered Rock Hearts for the first time a couple of weeks ago, I think they’re going to be sticking around in the spotlight for a long time to come. They’re definitely one of the slickest New England indie acts I’ve had the chance to sit down with in the last couple of months, and though they’re a long ways from the cites of origin for bluegrass and the bulk of classical Americana’s greatest players, they’re exuding the confidence and skill of longtime southern musicians in this fascinating debut affair.