The Confusionaires Release From the Headache to the Heartache 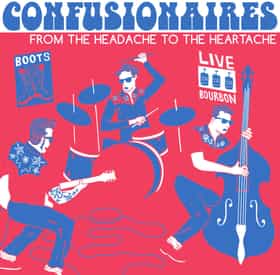 Garage punk revivalists essentially reshaped the narrative for American and Canadian indie rock in the late 1990’s and early 2000’s, and for those of us who are old enough to remember what the before and after sounded like for that era in popular music, it’s easy to understand why The Confusionaires are clicking with millennials as well as they are with the release of their new album From the Headache to the Heartache. Less an extension of the second-wave garage rock movement and more a supernatural conjuring of American blues, Canadian rockabilly and a touch of jazzy, post- alternative moxie, The Confusionaires’ style is as unique as I could ask for it to be this fall.

The video for the band’s new single – and leading track off of From the Headache to the Heartache – “I Got a Heart” is simple, just like the other songs on the record, exhibiting a concept that puts muscularity of natural grit and thus forces us to embrace artistry through texture as well as tone and tempo. The Confusionaires are a surprisingly deep-thinking band given their meat and potatoes-brand of rock n’ roll rebellion, but despite the cosmetics, I think it’s pretty clear after hearing this LP just how much charisma and brilliance they really do bring to the table.

We don’t hear a lot of invasive percussion in From the Headache to the Heartache, but instead some rather passive beats in songs like “I Ain’t Goin’ Home With You,” the slow-seducing “Romantic Mystery,” mathy “Sour Mash” and galloping “Side Dish,” but I actually think this benefits the melodic half of the music exceptionally. There’s more than enough physicality to the grooves in all of those songs to get our speakers quaking even at moderate volumes, and if anything, I think this is telling of how much positive friction the band can generate when they’re really firing on all cylinders above all else.

From the Headache to the Heartache isn’t the only cool Canadian piece I’ve had the pleasure of listening to this autumn season, but it’s made me very interesting in hearing what The Confusionaires are going to develop out of its framework next. They’ve got a good window into the international spotlight with compositional hybrids like “One Less Cowboy Out on the Range,” “Sometimes I’m Bad” and “I Got a Heart,” and with the right exposure to the college radio market, I think they could really explode down south sooner than some might expect.