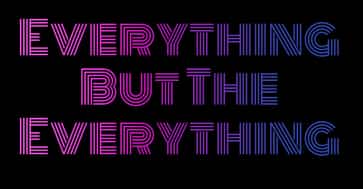 Everything but the Everything has one of those lengthy titles that reminds one of simpler, purer times. A particular era it calls to mind is the 80s, where edgy and eclectic band titles weren’t something to be scoffed at but rather lined up the columns of the Billboard 200. The contrast between said name and the common marketing PR choices in the Hollywood music scene only cements the implication creativity is dead and corporate reigns supreme.

That being said, the indie music scene is seeing an entirely new brand of celebrity emerge from the depths, courtesy of the world wide web. And considering the current economic state of affairs when it comes to the devastation of Covid-19, the head of the ‘internet celebrity’ concept is rearing especially high. Artists previously dwarfed by big budgets and aggressive corporate marketing now are having their moment in the sun, the average consumer turning towards all things digital in the wake of concert venues, cinemas, and stadiums indefinitely being closed for the rest of the foreseeable year.

In this fissure, Everything but the Everything has made its debut with a set of critically acclaimed singles and playlists the band premiered on its Spotify page. There’s a sense the simplicity of their distribution plan is something of a finger in the eye of corporate music giants, the group already making waves with all of their music to date having been the product of self-releasing. Songs that should be topping the radio and digital download charts are now available for free across one of the most popular music platforms in the world, and Everything but the Everything seems to be loving every moment of it.

The contrarian nature of their marketing schemes are one-upped by the content of their songs, following a similar independent nature not confined to any specific genre, formula, or overall compositional style. The band members seem intent simply on creating, not creating for or to pander to. Yet there’s no denying the topical choices for their lyrics indicate they are very much of a crowd many consumers can relate to, particularly with the millennial generations making up a key inspirational block for what remains popular and in-demand. Part of what the latter requires is a sense of reflection, and the band dishes such sentiments out in droves. After all stanzas such as I only know what’s inside, it’s a daily fright this fight don’t get more stereotypical and perceptive of the typical millennial mindset than that.

The band is also helped by its wild, somewhat kinetic sound comprised of juxtaposing, somewhat unusual musical components. While classifying themselves as ‘modern rock-and-roll’, the band fluctuates between something feeling like a mixture of soft rock and alternative to full-blown dream pop meets UK Jungle. Everything is unpredictable and unsafe, almost like hearing a retro band from the 80s for the first time on vinyl rather than through a digitally remastered medium. The flaws only add to the edge, making the more hardcore and ‘angry’ tracks extra scintillating viscerally. The band isn’t just interested in straight musicality as it is in providing the listener with a well-rounded, wild ride akin to a rollercoaster rather than the staid nature of a standard studio release.