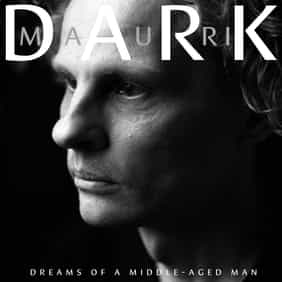 With a graceful hum that starts to resemble a yearning moan as the next few seconds go by, “Up to Us” charismatically welcomes us into the dark hue of Dreams of a Middle-Aged Man with a rather optimistic melody soon to swell from the silence. In songs like this one and the old world “Hymn for a Wanderer,” Mauri Dark – a.k.a. Mauri Kosonen – will wrap us in layers of neo-gothic harmonies as if to utilize their patchwork of depression to convey a greater sense of unity and kinship with humanity.

Unlike the Nick Cave types, Mauri Dark is a singer/songwriter project that relishes in the shadowy side of folk music without wallowing in the angst-ridden elegies of a bygone era – there’s poetry to tracks like “Shades of Gray,” but it goes well beyond the limitations of linguistics. In every song here, we’re offered brutal honest as it’s perceived by a truly passionate artist, and whether you’re prepared for the reality of the narrative or not, Dreams of a Middle-Aged Man lives up to its title on all fronts in the most emotionally provocative way I could have pictured.

“X-Renegade” is one of the more fluid, straight folk compositions on the record, and while it lacks some of the bite that “Poison Woman, the album-opener, builds its entire mood off of, songwriting themes aren’t the primary point of cohesion in this LP. From the title track to “Worst Enemy,” there’s little to connect the material in this record beyond a handful of cosmetic similarities and Mauri Dark himself, whose personality shapes everything on the album to sound like an extension of himself. His warmth even against the backdrop of a wintery melody in “Thin Line of Understanding,” the LP’s lead single, is absolutely unexpected and heartwarming, gripping us with its tonal presence while still echoing the hollow chill of the instrumentation. He’s really good at setting up the premise with his very method of singing, and that’s something a lot of artists would just as soon spend the better part of their lives trying to perfect (or even learn in the first place).

Dreams of a Middle-Aged Man is both the unguarded “Chains of Solitude” and the lusty “Love Will Prevail,” and while it’s only the first solo album we’ve collectively heard from Mauri Dark, my gut tells me it isn’t going to be the first breakout hit to bear the moniker. This is far and away one of the most enthralling debuts I’ve heard out of the international underground in 2020, and though it lacks a lot of the trappings that would allow for it to have major mainstream appeal across the world, this is perhaps what makes it feel like such an uncut gem from beginning to end. Mauri Dark has my full support and respect moving forward, and if you’re a fan of independent folk music, I’d encourage you to get ahold of Dreams of a Middle-Aged Man before the year has come to an end.