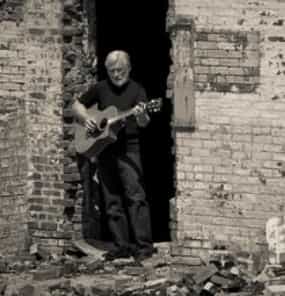 Concept albums are nothing new. If you’re a fan of Green Day, you’re familiar with American Idiot. The Beach Boys’ brought us Pet Sounds. The Beatles’ masterpiece Sgt. Pepper’s Lonely Hearts Club Band is one of the most famous concept albums in history. Singer/songwriter David Arn has released the incredible concept album, Traveler Tales. In his songs, he takes on the perspective of 14 different travelers, revealing much about human connection and personalities than you could ever dream. In an era of singles and quick soundbites, it’s quite refreshing to sit and immerse yourself in these 14 different travelers.

Arn’s voice is inescapable. He easily wraps the listener around his fingers. The beginning of the album is a perfect blend of his edgy voice, coiled around the country/Americana guitars and even steel guitars. What I discovered as a listener, right off the bat, is that Arn’s lyrical talents are just as potent as his strapping voice. Bob Dylan fans will surely be impressed with lines like shadows cross the moon, memory has me bound with souvenirs from higher ground (“Thirteen Days: The Exile’s Tale”). He switches gears quickly in the next track, “Not Amused: The Wanderer’s Tale” and professes I might have been grinning, but I’m not amused. “Not Amused” features a tickling piano bed that just had me ensconced.

Moving along, the songs “Not Going To Kill Us: The Father’s Tale” and “Mother’s Day: The Mother’s Tale” offer quite different emotional grips. My reaction in “Not Going To Kill Us” is one of sadness. I say that mostly because the steel pedal makes that sound to me – it’s not unnerving, but it’s not comforting. It’s stark. In “Mother’s Day”, singer Ava Hart sings about being the mother of an autistic child. The storyline is incredible, and I don’t say this with pity, but I say this to champion Hart. She’s amazing. This song is gorgeous and nearly rendered me in tears. So many people can put themselves in Hart’s shoes and she shares with them an incredible bond just by singing her truth.

One of the song’s that surprised me the most is “Traveler: The Minstrel’s Tale”. I applaud the jazz textures, cascading piano and saxophone streams. It’s a great song! Arn steps into a little rockabilly land in “You Never Really Know: The Fool’s Tale”. You don’t know he inserts, followed by until you fall in love. I went back to this track several times. It definitely grew on me. I also kept returning to “Keeping My Distance: The Veteran’s Tale” and “St. Paul’s Chime’s: The Bystander’s Tale.” Both of these songs, poignant to the core, tackling homelessness and then loneliness.