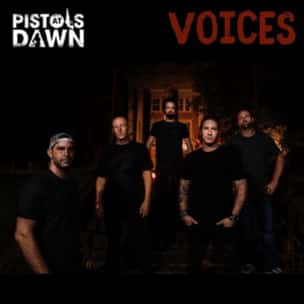 Atlanta based 5 Piece band, Pistols At Dawn, are a blend of Alt Rock, Metal, and Modern Rock stylings. They consist of, Adam Jaffe on Drums, Tommy Richardson on Guitar, Devin White on Guitar, Billy Sullivan on Bass, and former Rockstar Supernova finalist, Chris Pierson on Lead Vocals. The band’s original Guitarist, Mike Buffa, tragically passed away in 2018. Buffa was a founding member of PAD, in 2015. Their new single is their first one from the 2020 EP, Nocturnal Youth.

“Voices” isn’t a full on audio assault, but nor is it a pseudo ballad type. It’s somewhere in the middle, which typically seems to please the largest contingent. It’s got the growling vocal motifs, the slightly down tuned guitars, and it’s heavy on cymbals. However, the track is supremely well composed and equally well performed. Pistols At Dawn may not be reinventing the wheel, but they certainly know how the wheel, works.

The band was inspired to write “Voices,” as a way to address the potential to become overwhelmed by the seemingly endless downpour of rhetoric and opinion. In today’s world, everyone has a platform to express their opinion, and while democratic in its intent, we’ve also seen how divisive and disillusioning it can be. PAD either observed, experienced, or both, just how taxing this can be on one’s mental health, and overall state of being. It’s a noble effort, and it should always be lauded when artists use their platforms to actually say something. It never hurts to have a rocking track, behind that message, either.

As far as production goes, “Voices” is top notch. The band enlisted Jeff Tomei of Smashing Pumpkins and Matchbox 20 fame, to produce Nocturnal Youth, and subsequently, “Voices.” The record was mixed by Maor Applebaum, who has previously worked with Faith No More. The guitar tracks are aligned, perfectly, and they demonstrate the skills of both Richardson and White, individually and collectively. Pierson performs at such a high level that you get the feeling he doesn’t need much in the way of being produced, and the drums and bass put the heaviness in the track.

The video for “Voices,” features the band in a single room shot, surrounded by a buffet of candles. They claim they were going for intimacy, and while it feels a bit claustrophobic and nondescript, it ultimately serves its purpose. With the exception of Pierson, who has something of a look, the rest of the band appear to be just regular guys. Some may be critical over the lack of a definitive esthetic, but it really boils down to your genre, and who you’re trying to connect with. Pistols At Dawn is a rock band, and to attempt to look like anything other than who they truly are, would likely be reductive.

For fans of energetic and impassioned Rock Music, “Voices,” will satisfy. The performances are without fault and there is a meaningful and significant message, contained within the song. Personally, I was left wanting to hear more from the band. Pistols At Dawn, shows the ability to be captivating with “Voices,” and that promise should carry them into their next phase. As for their current phase, Nocturnal Youth, and in particular, “Voices,” is loud and impressive enough to get people to listen.