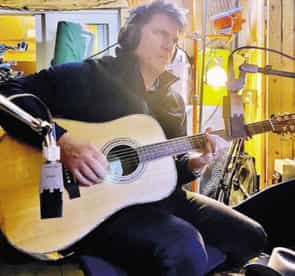 A life in the country is a life that is good, sings Chris St. John in his opening song, “I Need a Horse”. It might sound strange coming from an attorney (and former judge for that matter) but one has to imagine he might be thinking that a life spent behind a desk or a nose stuck in a law book is not really living – that slowing down and really looking around the beautiful land is really where it’s at. “I Need a Horse” is just one of the songs to really piggy back off on the delightful I’m Dreaming album.

St. John brings songs to life that are easy to run back-to-back over and over. These are songs for the weekend, for summer days and for simple enjoyment. Already he’s released two singles, “I Called You Rose” and the enchanting “I’d Send You My Heart”. Both of these are excellent choices for singles, but there’s not a bad apple in the bunch. These 10 songs are each majestic in their own way – it almost doesn’t seem fair to call it a debut. St. John’s careful recordings all provide a unique chapter to a man that has lived quite an interesting adventure. The hustle and bustle of corporate life, as well as working in the political realm of this former Congressional Aide doesn’t quite match up to the sonic canvass he paints in I’m Dreaming. That’s the point.

Remarkably the story they all tell ties together by the album’s end. I think they are all a mirror into St. John’s soul. His wants, his life experiences, his loves, his losses and more. “You Sang to Me” is one that really caught my attention. After the very homey “I Need a Horse”, the opening moments of “You Sang to Me” include hospital sounds – almost as if someone was coding. From there, St. John’s never-wavering voice shares the story of the time he was in a medically-induced coma. He could hear the nurse’s voice. You did not know me, you sang to me. It’s a beautiful image and immediately transported me to the theme of someone in the background cheering for another human. There are people all around our lives that connect our stories to theirs – from teachers, to police officers and more. We must all have angels singing to us.

I’d also like to highlight “Two Tender Angels” and “Peggy O”. These last two tracks are twangy, and feature some excellent guitar work. “Two Tender Angels” has a swell of a country-western vibe, and “Peggy O” almost saunters into the Simon & Garfunkel 1966 classic “I Am A Rock”. St. John pours his heart out and sings will you marry me, Peggy O? It’s romantic and incredibly sincere. I was able to put myself in that moment, and he shares with his listeners a turning point in his life. What a love to share, and what an artist to craft these songs. Chris St. John’s I’m Dreaming is through-and-through a great debut.