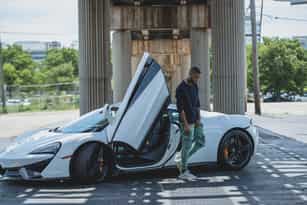 Some artists put everything they’ve got out there on the first couple of verses and let the beat tell the rest of the story. Others would just as soon spend a lot of time building up to the prose, often diluting whatever the message was with a lot of chest-pounding and unwanted machismo where it doesn’t belong. Rappers of all stripes have been relegated into a couple of predictable groups as far as the mainstream narrative is concerned, but to the left of the commercialized side of hip-hop, we find artists like Leol, whose new single “Move” follows neither path but instead builds on melodic foundations that only become more endearing with regards to the lyricism my man puts up from start to finish in this masterpiece.

“Move” does what its title says it can by getting us into a sensuous rhythm before we even know what the hook is going to sound like. There’s an easy flow to the beat, and it’s made so ahead of Leol ever coming into the fold as to give him as smooth a transition into the spotlight as possible. If he’s indeed thinking about the psychology of this song’s first sixty seconds, he’s trying to poise the first half to intoxicate us only to have the second reshape into something a little more rigid and righteously old school by design. You can’t get this kind of experimental, alternative attitude just anywhere, but you can expect to find it in any song bearing this man’s name in the byline.

Leol has confidence that doesn’t feel like the fodder for pop arrogance we hear in so many successful rappers and rockstars the same; he’s in love with the medium, with the act of rapping itself, and that love has such a profound impact on the way we’re to interpret the aesthetics of “Move” that I don’t envision anyone calling this single anything but a personal, really well-produced piece meant to embody a bit of who this player is.

Trying times call for creative solutions, and my gut tells me that I should be grateful for Leol’s appearance in the spotlight over the last year. COVID slapped the music industry as hard as it could, but with the ingeniousness of work like “Move,” one has to wonder whether or not this era’s significant changes haven’t had somewhat of an artistic influence over how the underground has developed as exponentially as it has. Leol’s “Move” is a good example of the hybridity starting to dominate my desk as a music critic, and it’s representative of a player who, for all intents and purposes, has the makings of being tomorrow’s next big star. I’m sticking around to see where this man goes, and I recommend other discerning rap enthusiasts consider doing the same this September.