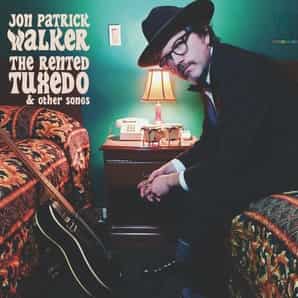 Understated but never under experienced, Jon Patrick Walker makes it easy to revel in his songwriting majesty in the new album, The Rented Tuxedo and Other Songs. His rousing mix of Americana-roots is crisp, with seductive harmonies and guitar (steel, sitar and more) crinkled into the arrangements. Discovering that each song is a chapter unto its own, Walker pulls the story together with a mesmerizing voice. He’s the string that pulls it all together – the voice that sculpts the story. Relatable and oddly surreal at times, the nine songs found on The Rented Tuxedo and Other Songs keep the conversation going.

The opening track “Auto-Tune My Love” has a western essence. The entire vibe of the song reminded me of a film noir set in Texas. Walker, who is a seasoned actor on stage and screen, dives right in with a voice that echoes passion. Despite the smoky hue tips found in his vocals, there is a wide range of innocence and empathy that runs deep. As a listener, I found myself drawn to his voice immediately because he sounded sad, but he also sounded content. Happy. He has that unique dynamic happening, with the actual music bed trickling down a path alongside his vocals. The steel guitar, sounding forlorn and longing, gives way to a steady rhythmic beat. It’s a very romantic song, but I suppose the sadness comes from being away from your beloved.

From there “The Stars, the Moon and the Sun” opens up an even more grandiose music base. This song felt upward, like Walker was out exploring. I think what I liked most about his songwriting, to this point, is that he takes little things and makes them feel bigger. His quirky, somewhat offbeat lyrics are charming and fun. One example of that peculiarity that is oh-so-delicious is near the end of the song with by the shore there’s a door, for the rich, for the poor, for the good, the misbegotten, for the children, for Johnny Rotten. Walker sings as though he were sharing this tale from generations before him and passing it down with confidence. The violins in the background, subtle and strong, move in a space-like fashion.

“The Rented Tuxedo” had me feeling Tom Waits vibes. Maybe I subconsciously was thinking of Walker as a character actor and Waits came into my purview or maybe it’s because Walker has a chameleon way about him. He transports you to exactly where he is when he sings about waking up in a hotel room, wearing a tuxedo. Just like any great song, there’s a ‘choose your own adventure’ component and I felt like Walker proved once again, he’s a mysterious artist just traveling through. We just get to listen in on his happenings and delightful tales. His acoustic guitar cuts just below the surface, giving that extra piercing to make the song even more interesting. Engaged by his voice, that strumming guitar and a beguiling sound – “The Rented Tuxedo” converted me from renting to buying – this one’s a keeper.