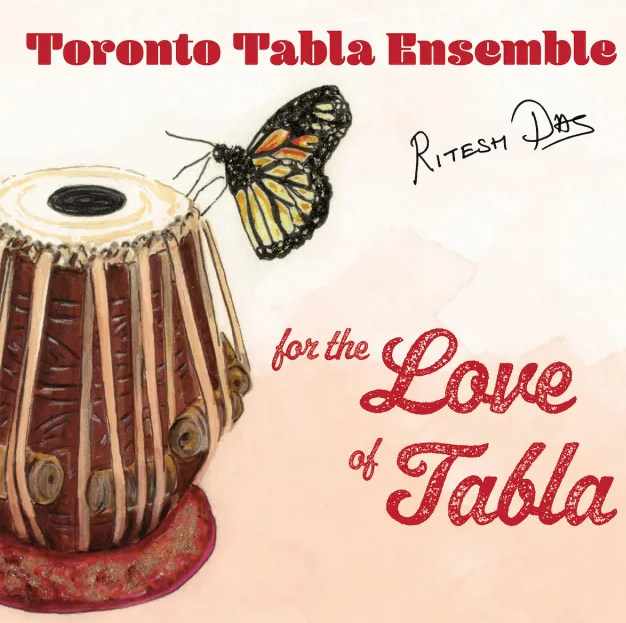 Acts like the Toronto Tabla Ensemble are more than rare. They are singular anomalies in an increasingly polarized world seldom capable of seeing past the end of its nose. The organization’s selfless dedication to expanding the profile of Indian culture, music, and history in such a way that it attracts interest from every social stratum. They are self-reliant and take on that mission in unpredictable ways; the ensemble’s artistic director Ritesh Das has led the organization towards opening a Tabla School, forming a Youth Ensemble, and even branching off into film. The ensemble has blazed quite a path since their 1991 founding.

Their latest album For the Love of Tabla features ten wildly varied compositions, all originals, varying from straight-forward tabla instrumentals to Indian influenced pop with exotic (at least to Western ears) instruments. Many of the album’s best parts are when the ensemble’s unique synthesis of mainstream pop and Indian music reaches its zenith. It’s an inspired collection overall, so we have plenty of chances to hear great music.

Tabla forms the foundation for everything. Other instruments are important for fulfilling the ensemble’s vision, however, and the opener “Jovano Jovanke” provides us with the album’s first example of that. I believe the song’s blending of assorted moods into a seamless musical statement is the song’s principal achievement, but it doesn’t stop there. “Jovano Jovanke” practically throbs with emotion and the tabla’s restless heartbeat punctuates it all. “Prayer for the Mother” has a marvelous vocal full of feeling and the phrasing keeps everything reined in rather than allowing the song to slip into melodrama.

The recitation powering “Summer 2020” is an example of the various faces the ensemble wears. It is every bit as convincing and unexpected musical touches such as flute set the song even further apart. Toronto Tabla Ensemble’s consistent ability to freshen each new track without ever lapsing into repetition doesn’t mean the collection is a jarring mishmash. Far from it. There’s an underlying unity in these songs that even a cursory listener will hear.

“Burning Sky” appropriately simmers throughout much of the song. Woodwinds reappear in this song and layer it with a meditative edge that’s near-foreboding. The cinematic nature of songs such as this is obvious, and it isn’t difficult to imagine someone using this song as a soundtrack. It’s full of dramatics without ever sounding overwrought. The finale “Shyma Sundara” is one of the album’s most expansive numbers but there’s no sense of the ensemble overreaching. I’m glad they decided to end the album with a lyrically driven song but that isn’t necessarily true.

There is always a near even balance between music and words when Toronto Tabla Ensemble is working in this vein. The sparkling vocals are a high point of the album, not just the song, and the music complements it. Casual and hardcore music fans alike should find much to love during this release; it does not sound remote from our experience proving, once again, that music remains the universal language.