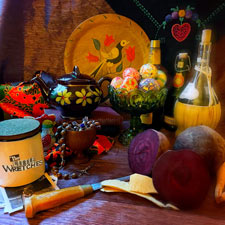 Little Wretches are part of a larger musical movement, indie folk-rock, but they don’t imitate anyone. Their embrace of retro songwriting styles, traditional instrumentation, and imagery common to such music isn’t pastiche but, instead, transmutes their individual experiences through a recognizable and time-tested vehicle. There’s a lot you’ll hear over the course of Red Beets & Horseradish’s thirteen songs that will remind you of other bands, artists, and singers. If you listen closely enough, however, and you know what you’re hearing, something else clear emerges, the proverbial voice all their own.

“Rise” begins Little Wretches’ new album with a slightly remarkable and telling statement about ego. Robert Andrew Wagner, the band’s main singer, songwriter, and guitarist isn’t so married to the idea that Little Wretches is his band that his hand has to be deep in every song. Jack Erdie’s songwriting dovetails with Wagner’s own, there’s no doubt of that, but it gives the album’s first song a point of view it won’t revisit.

It isn’t intentional, really, but “Rise” has more commercial potential than the remainder of the album. The lyrics during the song’s verses are arguably too involved for your standard hit single but the chorus overshadows that and makes the sort of immediate and open-ended emotional connection that listeners value. “Lovingkindness” has the same strengths. It’s fashioned from similar materials, as well, but the vocal interplay during the chorus is special. We hear playfulness, as well, in the song that recurs throughout the collection.

“Nothing Was Given to Me” is one of the album’s songs showing a nuanced understanding of human nature but, especially, the human voice. Wagner applies some affectation to this spoken word vocal. Real human qualities come through, however, and we experience several emotions after being drawn into this story. “Tiger Pajamas” is an unlikely title, perhaps, for such an emotionally devastating moment. Putting such a curiously buoyant face on personal suffering drops your defenses further and lets this song get under your skin. It’s a difficult but rewarding experience.

“It’s Raining” features some of the album’s best writing. You should listen to this song at least three times before assuming you understand exactly what’s going on here, but even then, it’s open to interpretation. Wagner recites the words rather than singing them, but few will mind. “Old Lillian’s Story” moves even further in that direction and excels even the earlier “Nothing Was Given to Me” in terms of character development. His ability to achieve a consistent balance between the music, vocal, and lyrical content is one of the album’s best virtues.

The steady pacing of “Walked Along” has a breezy tone. It’s more evidence for just how much time Wagner has spent watching people and taking note of their stories. It isn’t merely regurgitating details strip-mined from his life or others; there’s always a sense of a powerful imagination at work in these songs. “It’s All Between Me & God” opens with a fat acoustic guitar jangle before harmonica joins in. It carries listeners into the verses and the valedictory spirit of the lyrics makes for an excellent closer. “If there’s one thing I could change about myself/It’s that I would have a lower threshold of pain” is the sort of lyric any songwriter would crave and the song’s full of such moments.  Little Wretches has earned whatever success they experience with Red Beets & Horseradish.