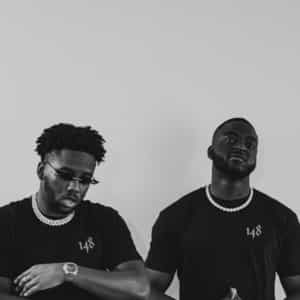 The slow jam “Summer Breeze” might not have the same punch that a lot of its tracklist predecessors do in the new album Sampati from 148, but this just might be the main reason why it works so well as the closer for this debut LP from the acclaimed hip-hop duo. “Summer Breeze” brings us full circle from where we begin in the viral single “Topeka Vibe,” and while it doesn’t hit us with as much force, its melodic trappings are some of the best of any you’re going to hear on this record.

“Odds” is much brasher and vividly stylized after Pop Smoke’s signature sound, though this sounds just a bit more disciplined by comparison. “Pop It” is similarly cut from a black and white concept, but its lack of frills doesn’t leave us wondering where the true finish of this song is. If anything, both of these tracks sound like they were made with the intention of releasing them as remixes at some point down the road, and the flexibility of their production style definitely backs this notion up. To be versatile, 148 can’t just give us tempting singles here, but a couple of worthy templates as well.

The profoundly melodic “Luv 4 You” takes a lot of the tension away from what starts off in “Bankulli,” which brings Hod into the fold for Sampati’s lone feature. The constant ebbing of harmonies throughout this tracklist might come off as being a little jarring to some, but by and large I think it was necessary to give us a good combination of speeds at which 148 can travel just to showcase how much they really can do. Their competition in the American and Canadian undergrounds is pretty stiff, particularly in the former over the latter, but they don’t sound the least bit shook here.

“Wavy” has some inclinations towards progressive R&B that I would love to hear more of, and along with “Body Rock,” I think it’s the best demonstration of the vocal skills this act is bringing forth this spring. It’s one thing to lyricize about life, but to create a mood through the rhythm of your vocal delivery is something that requires a lot of skills that most players just don’t – and won’t – have in this lifetime. In this area, 148 really has a lot going for their brand right now.

From the shove that the groove gives us in “Topeka Vibe” to the softer moments like “MIA” or “Summer Breeze,” Sampati is an album that doesn’t always stick to the same page creatively, but this is part of the reason why I was so keen to enjoy it this May.

From what 148 has already delivered in this record, it’s more than obvious that they’re a special act developing in the underground right now, and they don’t care about the branding you’re going to give their sound or the aesthetics that it comprises. With a bit of worldbeat here and a lot of hip-hop there, they’ve got their own thing in Sampati. Kim Muncie