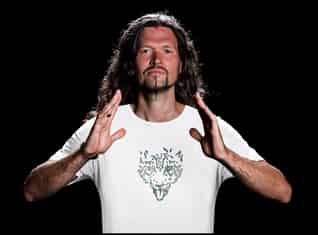 Most rock musicians who embrace the art of overdrive end up using distortion as something to hide behind. That isn’t the case with Vuola, and in his new record Alouv, he uses this crucial element of tonal augmentation to make his emotions even clearer to the audience. His skills are brought to the spotlight in tracks like “Vapaa Uljas Onnen Lapsi Aaamun” and “Omana Omala Ogana Odati Ojoda,” and at the conclusion of this five-song epic, it feels like we’ve been listening to someone draw with sonic paints, each one of them just a little more spellbinding than the one he selected before.

“Under Above Orion Venus Loves” and “Laugh Vivid Often Adore Unity” are probably the two poppiest works on this EP, and yet they don’t abandon any of the experimental facetings that all of this material is sporting just to get to that point of mainstream accessibility; the opposite, in all honesty. What I love about Alouv is that it features an artist in Vuola who isn’t limiting himself by aesthetic or design concept, which is something too many of his contemporaries are quick to do when they get into the studio. This is elaborate and yet concise, a combination I hardly ever encounter as a critic.

Enigmatic but not pompously inaccessible as the standard for progressive rock has become over the past forty years or so, Alouv is more than an extended play from the underground – it’s an experience that I would suggest any music lover give a shot. Vuola is a very interesting character, and while he doesn’t play by anyone’s rules, he isn’t totally an outsider looking in. He can appreciate music theory as well as experimentation, both of which have rather key roles to play in Alouv. As far as EPs go, this is a real find.