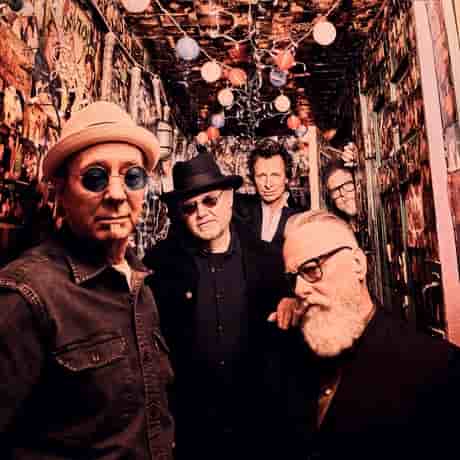 You’ve heard this story before. It hasn’t quite been told in this iteration, however, with onetime darlings of the more than fledgling rock scene of early 1990’s Nashville playing a starring role. Guevara zoomed right up to the brink of potential global success before fashion and bad fortune knocked them out of the box. The whole band’s existence comes out of the blue. They likely never expected to go as far as they did in their first incarnation and it would be difficult, if not impossible, imagining they thought they’d ever be back here again.

Here is pushing a new collection in 2022. Halcyon Days doesn’t turn back the clock and regurgitate the band’s first album with different titles. Instead, it serves audiences a nine song set bristling with modern concerns and successfully revamps the band’s sound for today’s audiences without ever diluting it. “Resurrection #9” has plenty of Guevara’s sarcastic and skeptical humor. It careens between a near-guttural churn and brawling flourishes interspersed with buzzsaw-like guitar breaks where the six strings cut deep into the skin. This song is back from the dead, but it’s packing a switchblade.

Guevara keeps the rock and roll temperature burning high with the second cut. It’s spiked, however, with punk rock attitude, however. “Got Any Change?” barrels headlong towards its inevitable conclusion with an added boost from the guitar. The explosive flashes of rhythm guitar blasting off this track help make it memorable. Some listeners will prefer zero vocal effects applied to frontman Steve Taylor’s voice during “Surrender”, but more will hear the band’s restraint. It’s far from every line and the passages where the post-production enhancements are obvious ratchet up the song’s drama instead of dragging it down with affectations.

“Still Know Your Number by Heart” is cut from a very similar cloth. It goes all out, however, whereas the aforementioned tune exercises a modicum of restraint in comparison. This is a throwback song as well recalling older genres like rockabilly and bubbles with punky fervor. The wonderful thing, above all else, about this song is that you can or could twist it in multiple ways, strip and refurbish it with different music, slow things up, and you’d still have a punchy and memorable tune.

“Goldfingers” is also part of the album’s peak. The opening and verses pack a wallop, but everything comes together during the chorus. It’s arguably the best moment on Chagall Guevara’s new album. The song’s subject matter is a little played out, we’ve been here before, but no one can say that Guevara doesn’t hit us with their own unique verbiage. “Treasure of the Broken Land” has a surging quality that makes it an ideal closer. We don’t get the impression that things are coming to any sort of definitive end but, instead, we get the sound of a band pushing away from this release and lighting out for new lands.

The mid-tempo but relentlessly steady pace sweeps you along and there’s an interesting instrumental break near the song’s midway point that gives it an unique spin. Don’t call it a comeback. They would likely prefer “much delayed sophomore effort”. Better late than never would have made a good title. No matter, Chagall Guevara’s back with Halcyon Days, older, and definitely wiser, no matter how much they may dismiss that latter notion.