Elizabeth Sombart’s “Singing the Nocturnes” Prelude to a Grammy 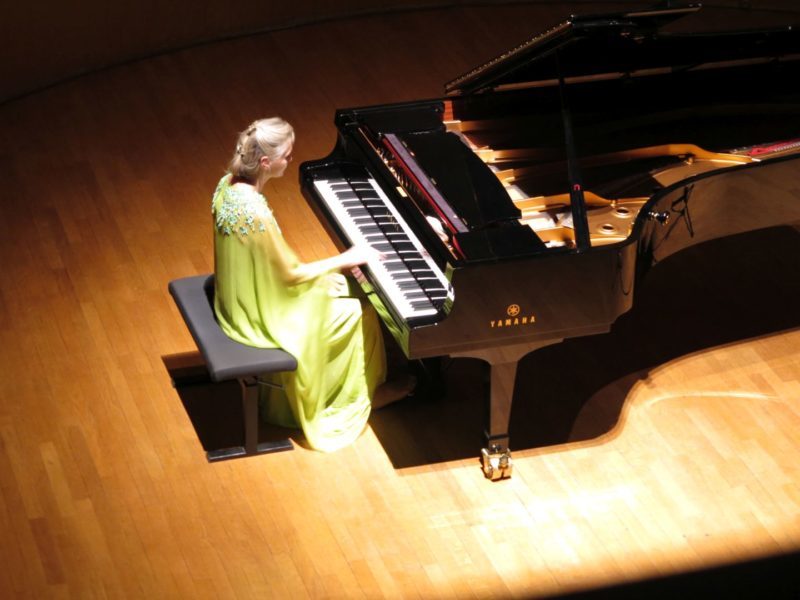 The 21 different performances included in Elizabeth Sombart’s Singing the Nocturnes are a more than adequate overview and re-interpretation of Frederic Chopin’s vaunted Nocturnes written just before the composer’s untimely death. Sombart’s musical reputation is built on superlative piano playing that’s propelled the French-born pianist from her beginning at seven years old, multiple years of study in various major foreign capitals, and working alongside the finest music instructors working today.

Her appreciation for Chopin certainly isn’t some sort of classical tribute for casual listeners. Classical music doesn’t have that sort of audience. Singing the Nocturnes has the dual utility of the individual pieces standing out but, regarding each of those 21 parts compromising a larger whole, Chopin’s construction maintains satisfying unity that catches your attention as well. Attentiveness rewards listeners with musical ideas and phrases that resurface several times throughout the work, always with some sort of variation, and never ornamental.

Extended works such as this never show a single face. Listeners, instead, confront a wide range of moods and visages that are as much a product of Sombart’s piano playing as they are Chopin’s compositional tilt. There is n frequent tug of war audible in the music between standing resolute and wavering from despair and it’s a lyricism that often prevails, but the melancholy has its lyrical language as well.

The warm and inviting tone Sombart achieves with Chopin’s material isn’t a big stretch for the French pianist. She’s embodying a mood present throughout Sombart’s professional life as well – witness her advocacy for those who don’t get to hear music with the 1998 creation of Fondation Résonnance. The organization’s mission is to expose individuals hospitalized, incarcerated, or orphaned, among others, to music programming they may never receive otherwise.

It’s the likely final push that secured Sombart the rank of Chevalier de l’Ordre National du Mérite for Lifetime Achievement in 2006 and a Chevalier de l’Ordre des Arts et des Lettres in 2008. These decorations elevate her to rarefied status in the global artistic community as it essentially confers the status of a living legend on Sombart.

The work continues. You cannot fault the straightforward and elegant presentation driving Singing the Nocturnes and it’s in keeping with Sombart’s general line of approach since first emerging out of her classical studies and into the global music community. She has played everywhere, far from her Strasbourg beginnings, and her talents qualify her as a citizen of the world, but there’s something more. It’s the indefinable yet unmistakable spirit present deep within interpretations such as Singing the Nocturnes.

Sombart understands Chopin’s melodic inventiveness, his mastery of mood, and best yet embodies the irrepressibly human uplift of his compositions. She does this whilst remaining “natural” and playing with fleet-fingered skill that never dissects or overthinks the performances. Elizabeth Sombart has the sort of accomplishments few musicians ever reach but Singing the Nocturnes deserves consideration as one of her finest moments. It’s durable, as well, and is likely one of the major Chopin performances in recent memory.  Kim Muncie